Editor’s Note: Today, Andy continues his introduction to his new MAP theory of investing. It’s an entirely new way to think about investing… and below, you’ll see how it all fits together.

Yesterday we explained how most investment advice is based on theories that are impossibly outdated for today’s modern – and manipulated – markets.

That’s why we want to introduce you to something else – something better.

It is a smarter – and potentially much more lucrative – way to invest. It answers the sorts of questions we get over and over from readers whose intuition tells them the “norm” is wrong.

Where do I find income when rates are locked at zero?

Should I still own bonds if the government is buying them too?

How do options fit into all of this?

Like we said yesterday, none of those ideas were around when Markowitz won his big prize.

Clearly the thought of protecting a portfolio with options didn’t cross his mind… After all, options weren’t widely available for another two decades. But all these things do fit our MAP theory.

We’ve said many, many times that interest rates are the hormones of the economy. It’s not a revolutionary idea. It’s why the Federal Reserve uses them as its most powerful tool.

Interest rates – and our interpretation of where they will head next – change the choices we make.

Since that’s the case, why do our most coveted investing models not include rates as a major variable?

Simple. When Markowitz penned his theory, the Federal Reserve had far less power. It didn’t hold televised press conferences, and its moves were hardly considered a driving force for the market.

It sat in the back and quietly pulled levers. Now it screams, “Hold my beer!” while it wildly mashes down the gas pedal.

That’s why our MAP theory starts with interest rates. It has five distinct levels, all based on “real” interest rates at the time (in this case, that’s the 10-year Treasury rate minus inflation):

Each level calls for its own unique mix of assets.

After all, if we compare an economy that has negative real rates with one that has rates above 5%, we’d see some stark differences. Wouldn’t it make sense, then, that our investing strategy would be starkly different as well?

Amazingly, Markowitz’s theory doesn’t allow for it… nor does it allow room for correlations that adjust based on changing rates.

A Faster Way to Get Rich

Let me be very clear about MAP theory.

The assets and allocations of each level are based on the mindset and conditions of the time. After all, that’s what “modern” means.

In other words, if the masses are rushing into something new and shiny (like tech stocks or Bitcoin), we must adjust our equations accordingly.

Again, that’s the downfall with Markowitz’s model. It fails to capture the constant – and often sudden – movements of correlations.

A 50-year correlation does you no good if it breaks in the 10 years before your retirement because of a fast-moving, new (or modern) trend.

That means we can’t lay out a strict investment thesis for our “Greater than 5%” level with any sense of accuracy until we get closer to that environment – which could be many, many years from now.

To describe today what that will look like would be mere guesswork.

But – and this is critical – using interest rates gives us the catalyst to adjust our allocations and make smart, forward-looking adjustments as we transition from one level to another.

Again, Markowitz’s theory does not allow for that. With his outdated model, there’s no catalyst for looking at current correlations and comparing them with historical numbers – a deadly flaw.

Take, for example, the level that we are currently at – negative real rates.

It calls for a relatively heavy dose of non-income-producing assets, like gold and cryptocurrency.

To say Bitcoin has a “historical” correlation with stocks is nonsense. It’s too new. To say it does or doesn’t have a tie to stocks is like getting married after a first date – we wouldn’t have much of a sense for each other.

But here are some key things.

Take this chart, for instance… 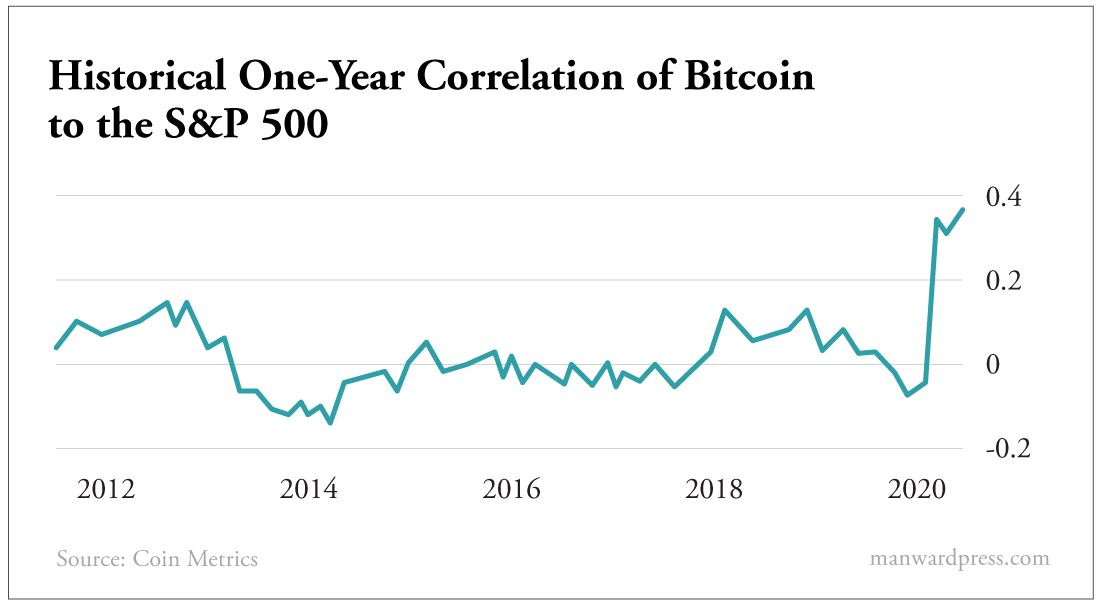 It shows that Bitcoin’s correlation to the S&P has been all over the place since its creation. And it has soared to a record high this year. It won’t last. But the reason the tie got so strong will.

As the Federal Reserve slashed rates and promised us it “isn’t even thinking about thinking about raising rates,” investors ditched the idea of finding income from traditional sources and poured into speculative assets.

Tech stocks… small caps… gold… and crypto soared. They will continue to do so as long as interest rates are low and consumers are willing to speculate.

Another class of stocks has found a massive amount of buyers as rates have plunged as well… buyback stocks.

It’s our favorite realm these days for big profits.

Buybacks certainly aren’t part of Markowitz’s equation. Like options, cryptos and ETFs… they weren’t even around when he did his work. In fact, they were illegal until the Reagan administration signed off on SEC Rule 10b-18 in 1982. Prior to that, they were deemed a form of market manipulation and were off-limits.

But in an economy with negative interest rates, they’re one of the biggest drivers of stock price appreciation.

So, manipulation or not, we must own stocks of companies buying back their shares when rates are negative. We’ll sell them – hopefully at a big profit – if and when rates rise. Because, at that point, the math behind our buyback strategy won’t make sense.

That’s the key to MAP theory.

We do what makes sense right now based on the biggest driver of the modern market… interest rates. And, bigger yet, we do it with modern assets – like Bitcoin, ETFs, options and buyback stocks. 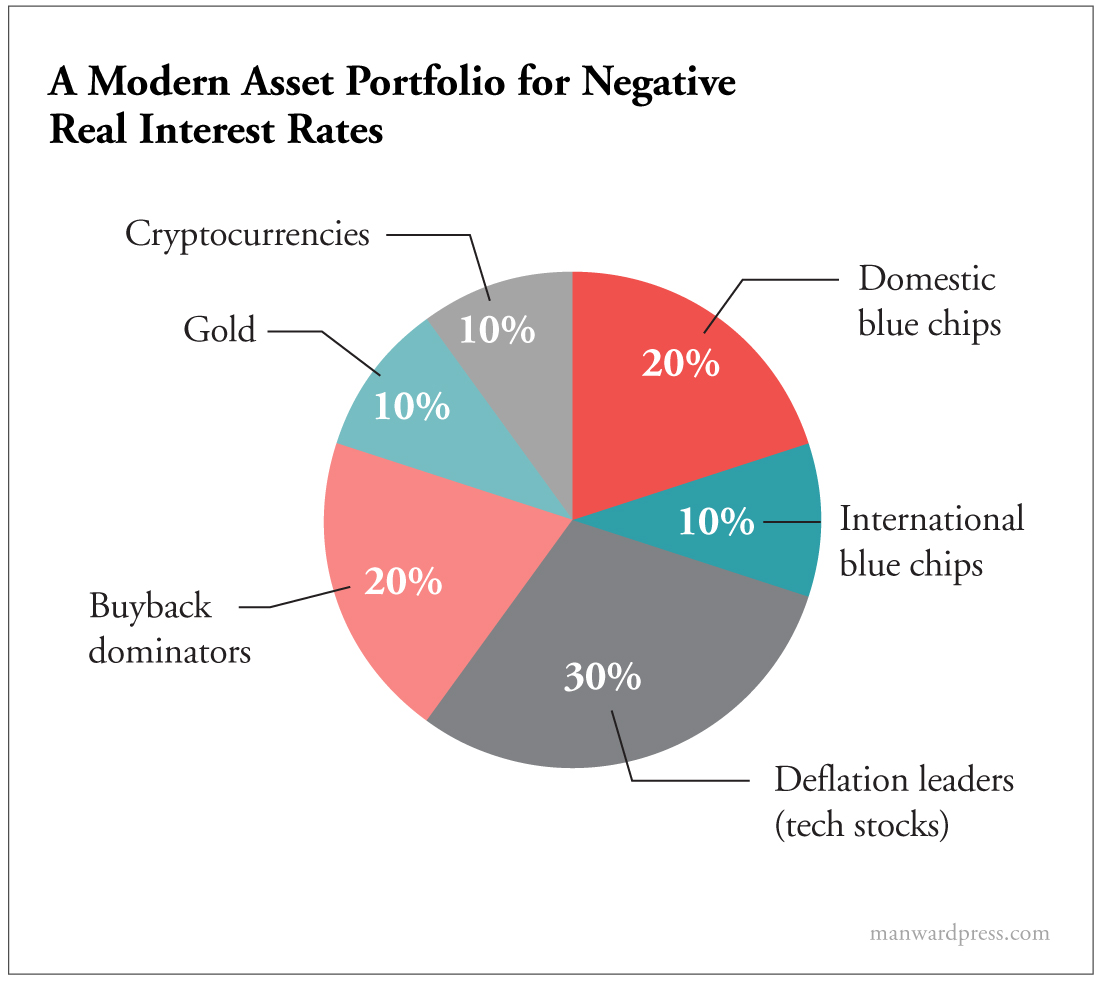 Domestic blue chips: Companies with $10 billion or higher market caps that pay a dividend and are part of a major index – like the Dow or S&P 500.

International blue chips: Same as above… but outside the U.S. The main variable is whether you buy a domestically listed American depositary receipt (ADR) or invest in a foreign currency on an overseas exchange. Tax rates and currency fluctuations are a concern, but holding assets in foreign currency is ideal.

Buyback dominators: With rock-bottom (or negative) real rates, it makes great sense for many companies to borrow money to buy their own shares. The return for shareholders can be far higher than the return they’d get with companies using cash for any other reason… especially when deflation reigns.

Deflation leaders (think tech stocks): To know whether a company fits this class, ask yourself a simple question… Is this company making prices throughout an industry cheaper? We’re not looking for companies that benefit from cheap prices or industries whose own prices are falling. We want the companies that are making prices fall.

Gold: Textbooks say gold is negatively correlated with stock prices. When one goes up, the other goes down. But nothing over the last decade has been normal. Both asset types have risen because money is cheap – thanks to Fed money printing. Now, in a rare mix for economic historians, owning gold is equal parts fear and greed.

Cryptocurrencies: Nobody knows the ultimate path for cryptos like Bitcoin and Ethereum. That’s what makes them 100% speculative. But just like gold, cryptocurrencies don’t have much of a use… until they do. As long as interest rates are at record lows and money is flying off the Fed’s printing press, the winds of the economy will blow in a favorable direction for cryptos.

Options: Few longtime investors could’ve imagined one day opening a browser, pressing a few buttons and buying an options contract to hedge against the market’s fall. But these days, you can buy options faster than you can buy car insurance. (Note: MAP theory treats options as a hedge. Because of this – and their rapid nature – we do not assign them a specific percentage in our allocation.)

While the holdings within each can be adjusted based on your risk tolerance, the proportion of the total portfolio allocated to each asset class should not.

Right now, nobody is thinking this way about portfolios. Nobody is challenging the textbooks and wondering why nothing in them makes sense in today’s markets.

A lot has changed in the last 70 years. Many of the prize-winning ideas that once dropped jaws have long been debunked. Many are even laughed at today.

Markowitz was a smart guy. His modern portfolio theory made sense back then.

But now we have a fresh set of truly modern assets and technology to add to the mix. Markowitz wasn’t wrong… but the folks who still follow his logic today are.

Editor’s Note: As Andy mentioned, a modern portfolio calls for modern assets. And right now, cryptocurrencies – the most modern of assets – are absolutely on fire… and could be the biggest story of 2021, which is why Andy has just begun offering exclusive crypto picks as part of his Alpha Money Flow trading research service. Click here to find out how to get access.

Do you have questions about Andy’s Modern Asset Portfolio? Send them to mailbag@manwardpress.com.