Our No. 1 Tip for Making Money in the Stock Market

Editor’s Note: Andy introduced a huge idea to his Manward Letter subscribers this year… a new “map” for investing – the Modern Asset Portfolio. It includes unique subsets of stocks… gold… options… and even crypto. It’s a modern portfolio for modern markets. And today and tomorrow, he’s going to tell you what’s behind this entirely new way of thinking about investing… and how exactly how you should take advantage of it.

We’re going to show you our No. 1 tip for making a lot of money. Follow these basic instructions and your ability to earn big money in the stock market will soar.

It’s not hard. If you can read a map, you can do this.

It takes just a bit of understanding.

But first off… Here’s what’s NOT working.

If you’ve ever picked up a book on investing, you know much of the investing world follows a model known as “modern portfolio theory.”

It’s the idea that if we put a mix of stocks together, measure their correlations and adjust our position sizes based on those figures, we can optimize our portfolio’s returns and reduce our risk.

Its debut revolutionized the world of money. In fact, it won a Nobel Prize.

Then again, so did António Moniz… the man behind the frontal lobotomy.

And so did Paul Krugman… an economist who’s never been right about anything.

There was even a recent president (we won’t name names) who stirred controversy for earning a Nobel Peace Prize… after getting nominated just 12 days into his term.

The controversies that have long plagued the various versions of Alfred Nobel’s coveted prize are one of the reasons The Guardian ran a story in 2015 that warned its readers not to get too excited about the ideas behind the prize and the schemes used to win it.

The headline said it all… “Don’t Let the Nobel Prize Fool You. Economics Is Not a Science.”
[mw-adbox]

That’s such a vital idea. And yet few investors understand it.

“The problem,” The Guardian says, “is not so much that there is a Nobel Prize in economics, but that there are no equivalent prizes in psychology, sociology, anthropology. Economics, this seems to say, is not a social science, but an exact one, like physics or chemistry – a distinction that not only encourages hubris among economists but also changes the way we think about the economy.”

In other words, the strength of a radio antenna is always a function of the square of its height… as proven by Nobel Prize-winning physicist Guglielmo Marconi. But the way we minimize our portfolio’s risk and maximize its reward isn’t quite as fixed as we’d be led to believe by the praise surrounding Harry Markowitz’s Prize-winning formula.

He’s the man, by the way, behind modern portfolio theory.

On its face, the math behind the idea is sound.

If we add the right mix of this… a little bit of that… and spice with just a splash of something else, we can optimize our portfolio.

Economists rejoiced when they first did the math. It all adds up.

The recipe is delicious. But there’s a problem… a big one. It turns out botulism kicks in the second we pull the soup from the burner.

We recently sat down to list all the problems with this Nobel Prize-winning theory of “modern” money management. We quickly needed a second sheet of paper.

The first problem is obvious. The theory is about as modern as a black-and-white TV. In fact, the first color set didn’t hit the market until 1953… a year after Markowitz published his coveted research.

That’s important because, again, economics isn’t a physical science… it’s a psychological science. Math formulas may not change, but markets and the investors who make them do.

Take, for example, the fact that Markowitz’s theory of reducing risk was penned before the first stock options were widely available… decades before exchange-traded funds (ETFs) became popular… and generations before the internet… and it was devised while – this is huge – a buck was still backed by a sliver of gold.

Quantitative easing… the death of interest rates… and runaway government debt… were never part of the math.

But in today’s market, these things shouldn’t just be part of the math… They are the math.

To have a “modern” system that doesn’t include truly modern assets, like options, Bitcoin, ETFs and ultra-efficient markets spurred by the instantaneous spread of ideas on the internet… is flat-out silly.

That’s the idea that takes us to the biggest flaw in this not-so-modern formula… correlations.

Again, the math behind the theory is sound. It all adds up. In fact, in business school, we spent an entire semester building a program that mapped out what Markowitz dubbed the “efficient frontier” – the ultimate mix of assets for performance and risk.

But again… the soup went sour as soon as it was served. By the time we entered a correlation into our spreadsheet, it was already old and inaccurate.

That’s the problem with theory and reality.

One sounds good… but the other is either ignorant or deaf to what it hears.

In reality, correlations go to hell when we need them most. We’ve written you about this before.

For example, when Markowitz and his cult followers were penning their first drafts of the idea, it was widely believed – and the math at the time backed it up – that bonds and stocks moved in opposite directions.

It’s the same with gold and stocks… the dollar and stocks… and even inflation and interest rates.

The textbooks say one thing, but reality hits us with its own ever-evolving opinion.

These assets are tethered… until they’re not.

We saw it during the 2008 crash and then again during this year’s meltdown. All at once, historically negatively correlated assets (those that move in opposite directions) moved in tandem. And it happened at exactly the same time as investors – who depended on Markowitz’s theory – needed protection the most.

Take a look at this table. It shows how when times are good, the diversification called for by modern portfolio theory holds us back. And worse, it shows that when times get tough, historically uncorrelated assets suddenly move together, costing us even more money. 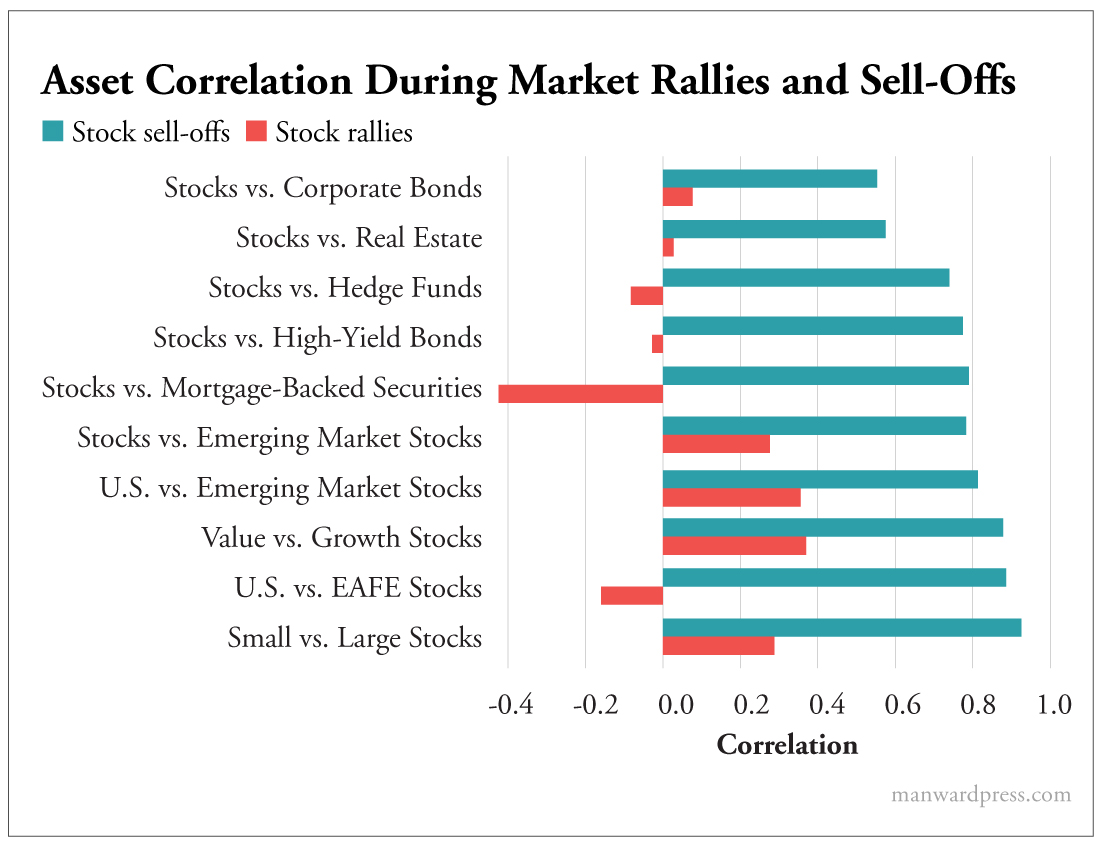 This is a dangerous trait that far too many textbooks and so-called financial experts blindly overlook.

Again, it’s the difference between theory and reality.

It’s all because economics is a social science… not a physical one. Once the majority of folks are following the rules, the rules change.

Understand that and you’re automatically ahead of the majority of investors. It’s our No. 1 tip for investing – if you do what everyone else is doing, then the very best you can hope for is mediocrity. (You can send the Nobel Prize to Manward’s office.)

That’s why we created something better.

And we’ll tell you all about this unique mix of assets – stocks, gold, crypto and options – and how they work together… in tomorrow’s essay.

Editor’s Note: Manward’s first crypto recommendation came with the unveiling of our MAP theory. It has already soared 60% in just a few short months. And readers have been hungry for more… which is why we are now offering exclusive access to even more crypto picks in our award-winning Alpha Money Flow trading research service. Be among the first to get these new recommendations by becoming a subscriber today.

Wall Street is full of bad advice. What’s the worst advice you’ve heard about investing? Send an email to mailbag@manwardpress.com.