A few weeks ago, we had an intruder on the farm… and now we’ve got helicopters buzzing the tree line.

It’s proof that one mistake leads to another… and that one economic goof can lead to an explosion of mistakes.

This tale is one you’ll want to note.

You see, Mrs. Manward called us in a bit of a panic the other day. There was a small black helicopter circling our house. He was flying within feet of the ground, going back and forth… back and forth.

It got so close that she could see the pilot looking at her. He waved, cocked the stick to the left and zoomed off for another run, making our flag crack from the wind.

I told her not to worry. He was spraying the neighbor’s corn field.

“Yes,” we replied. “But the first spray killed the weeds… the second spray fertilized what survived… and now this one is killing the diseases that ravage a crop after the field’s natural biology has been erased.”

What’s happening in the fields around our farm is one of the hardest lessons learned in the world of farming… that a single tweak to the ground or the plants in it has massive effects on the entire cycle.

Fertilize a flower, for example, and it takes the easy route. Instead of trading minerals and nutrients with the microbes in the soil (which takes energy), it’d much rather drink in a rich concoction of chemicals.

It ditches its trade partners.

The flower grows great… but the microbes in the soil die.

All is fine, until the fertilizer stops or no longer works.

With that, we pivot to the topic du juor.

Stimulus… and its role in the markets.

Just as it took the ag world decades to realize that one chemical begets another, the folks who write our economic textbooks are quickly learning that injecting money over here may have a profound effect way over there.

At the same time as we see some of the darkest headlines of our time – raging unemployment, soaring bankruptcies and plunging output – we’re predicting stocks will soar.

It’s not because we don’t believe the bad news.

In fact, we say the news will get worse before it gets better.

Through it all, we know that helicopter pilot has a job only because the fertilizer salesman did his.

One man kills the soil. Another brings it back.

It’s the same in the world of money.

Reams of regulations make it impossible for small businesses to survive… the Treasury mails the victims a $600 check each week.

Washington spends more than the world can lend… the Fed fires up its printing press.

Just like the fields above our house, the soil is all but dead and unable to thrive on its own… and yet the crop is lush and green – thanks to man and his many machines.

As long as the helicopters keep spraying, the corn will grow.

But what if the helicopter crashes? What if the fertilizer quits working? Or what if the old man writing the checks says enough is enough… and gets a steady job with Uncle Sam?

The crops will crash. The weeds will grow. And the money will stop flowing.

Someday, health would return. After a few painful decades, nature’s equilibrium would come again and the crops would be lush… but only until we started poking around again.

Now, we’re sure there are naysayers among our readers. We’re sure our ramblings haven’t convinced all that – like a heavy dose of fertilizer – the meddling in our economy is good for now… but will be hell down the road.

For those folks – the folks who are too scared to invest in a stake of this propped-up economy – we get it. But before you give up, we want to show you a chart.

It depicts the action of the S&P 500 and the amount of money flowing through the economy (using M2 for all you monetary wonks). 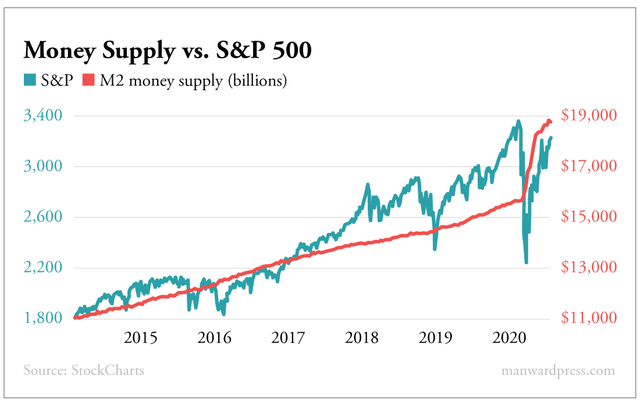 There is some healthy debate in the textbooks about the correlations on the left side of the chart. A rising stock market creates money of its own.

But there’s no debating that huge spike on the right in both the amount of money in the economy and the market’s moves over the last four months.

One surely led to the other.

With the crop threatening to die… the Fed took off in its helicopter and spread money all across the land. Trillions of dollars of freshly printed money made things green again.

It takes us back to the headlines and what we’ve penned so many words about of late. Without further application, this crop will die.

Millions will be evicted. Companies will disappear. Retirements will go bust.

The old farmer doesn’t have a choice… He’s got to keep spraying.

And, as that chart so beautifully shows, the more it spends, the taller our stocks will grow.

All that money gushing out of the chopper must go somewhere.

P.S. To put our money where our mouth is, we’re doing something we’ve never done before. We’re giving away my research on what could be the hottest stock of the year. All the need-to-know details, including the ticker symbol, are at this link.

Are you convinced we’ll see Dow 100K? That all the meddling in our economy is good for now… but will be hell down the road? Let us know your thoughts at mailbag@manwardpress.com.

Mark Ford defines what it really takes to grow your wealth year after year.

We dug up an old penny last night. Boy, the stories it could tell about the value of our money...

Chuck E. Cheese has gone bankrupt. But this story has an interesting and useful twist.