It’s up… up… and away for Bitcoin and its digital brethren.

It’s no coincidence that crypto smashed another big record the same day as the fine folks at the Fed told us they’ll continue printing $4 billion in new cash every day.

Bitcoin buyers know all that money printing has consequences… big ones.

At the current pace, the Fed is printing $2.8 million every minute.

That’s a lot of money.

For a better feel of the consequences, imagine the government erasing the wealth of a multimillionaire every single minute of every single day.

Every minute. Every day.

Inflation is the invisible killer of wealth.

But as we’ve written so much in recent weeks, most folks are nearsighted. They either don’t understand the concept or simply don’t care about it.

After all, they say, the Fed’s not destroying money. It’s giving it to any company that will ask for it.

Need some debt to jump-start your business? Need some cash to sustain a bad business?

Just stick your hand out. The Fed’s making it rain dirt-cheap money.

Get in line and get some.

What worries us most, though, is the grave disservice the nation’s media has done. The so-called Fourth Estate has done a lousy job of informing Americans about what’s happening.

Perhaps that’s the fallout of propping up an unsustainable business model with piles of government-backed debt.

Comcast (CMCSA), for example, owns NBC. It borrowed another $4.5 billion in August. Much of that was likely the Fed’s freshly printed cash. The company even admitted as much.

Disney (DIS) owns ABC and a slew of other outlets. It borrowed at least $11 billion this year.

And Verizon (VZ), the owner of Yahoo, made waves in the bond market this year when it issued a “green” bond worth a billion bucks. The debt – to be used only on renewable energy projects – was incredibly popular.

It sold at a price just 83 basis points above the risk-free 10-year Treasury.

It showed, thanks to the Fed’s heavy buying pressure, just how crowded the debt market is these days.

But again… the folks soaking up all this free money certainly don’t want to tell you about it.

That’s why we took a screenshot of this image from Yahoo Finance on Wednesday. 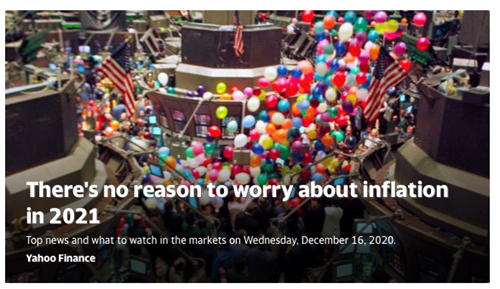 Don’t look here, they say. There’s nothing to see. All is well.

We can’t wait to roll that image out again when the Dow hits 100K… when Bitcoin is at $60K… and when inflation is ripping through the nation like an August tornado through Kansas.

Again, most folks are ignorant to what’s happening.

The fools in charge like it that way. It’s hard, after all, to rob a bank when everyone is watching.

But not everybody is blind to this thievery.

It’s why we’re a much bigger fan of the crypto world now than we were the last time Bitcoin was smashing records.

Back then, cryptos were the realm of speculators and gamblers. But not now.

The early adopters are smiling because the riffraff got pushed aside and the folks looking for a truly viable alternative currency have opened their arms to digital money.

“I own many, many more times gold than I own Bitcoin,” he said, “but frankly if the gold bet works, the Bitcoin bet will probably work better because it’s thinner and more illiquid and has a lot more beta to it.”

And just this week, of course, we learned one prominent hedge fund recently acquired $600 million worth of various cryptos… with plans to grow its holdings to more than $1 billion in the next few months.

“There is going to be a generational allocation to this new asset class,” said Eric Peters, the CEO of One River Asset Management. “The flows have only just begun.”

Now is the time.

Readers have been begging for the opportunity to use the strategy with digital money.

Our next trade debuts in just a few hours.

If you want to join us and get in on this red-hot trend… now’s the chance.

We’re opening the doors from now until next Wednesday at an incredible 75% off.

Again, the next trade goes live later this morning… so sign up now.

Are you excited by Bitcoin’s potential? Let us know your thoughts at mailbag@manwardpress.com.