Editor’s Note: I’ve got something different for you today. I’ve written about my love for a good glass of malbec before. It’s my favorite kind of wine.

Each time I write about the topic, readers want to know my favorite.

Well, today, we’ll take it even further. You’ll hear from a man who knows far more about the subject than I could ever hope to.

What most folks don’t know about my friend Will Bonner, co-founder of Bonner & Partners, is that he recently founded a private wine partnership. It gives folks access to the unique “extreme altitude” wines of northwestern Argentina (where the Bonner family has one of the most isolated ranches in the world)…

These wines are not only delicious. As Will reveals below, because of their unique growing conditions, they may also hold the key to a longer life with less disease…

From inside a cluster of trees, we heard a scream.

“Shi*t,” muttered my younger brother, as he leapt from his horse.

My father, Bill Bonner, and I had been showing my younger brother and his fiancée two extreme-altitude vineyards on our family ranch in Gualfin, northwestern Argentina.

One is accessible only by horseback. The other, just barely.

Go figure… Gualfin is an old native word for “end of the road.”

But the roughness makes Gualfin exceptionally suitable for producing an intense, complex red wine that may, in fact, be the healthiest wine in the world.

More on that in a moment…

Wrong Side of the Straw Pile

To say the family ranch is remote is an understatement.

It sits in the shadow of the Andes Mountains on Argentina’s wild, northwestern frontier, in a place known as the Calchaquí Valley. The nearest city is a rough six-hour drive in a 4×4 across a wide desert plateau.

In such a remote area, that which is not useful… is dinner. And the local horses know it. 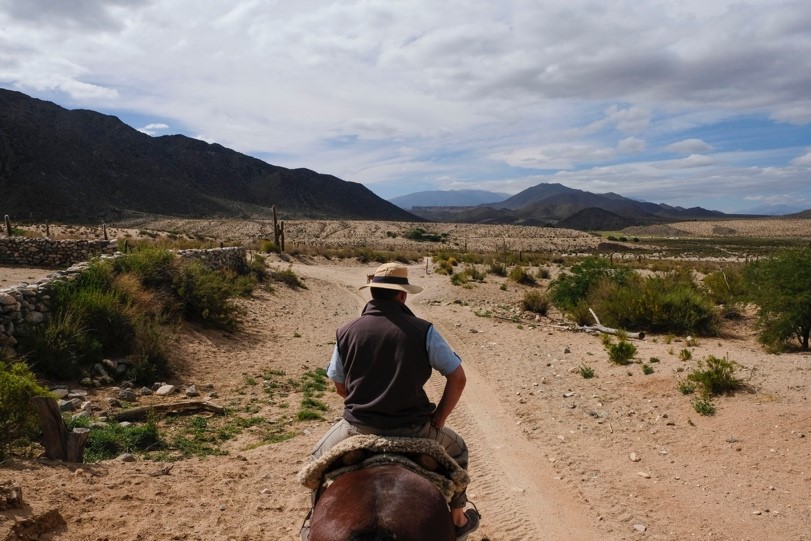 Riding Across the Calchaquí Valley

Accordingly, they tend to be a docile lot.

But the roan mare my brother’s fiancée was riding that day had woken up on the wrong side of the straw pile. Out of nowhere, she suddenly bolted, leaving the poor girl clinging on for dear life.

It’s a family tradition to bring prospective spouses out to the ranch. We call it the Gualfin Test.

The test is not whether they fall off their horse, or succumb to sunstroke or altitude sickness. It’s whether they demand to be driven back to civilization for a hot bath, air conditioning or (worse) a doctor.

For my brother’s fiancée, the test had begun. Still, she was in good company.

A Brotherhood of Survivors

Every organism on the ranch – from its people, to its horses, to our vines – must weather the Gualfin Test.

They contend with wild temperature swings (as much as 70 degrees )… powerful blasts of ultraviolet light through the thin atmosphere (80% more intense than in Bordeaux)… low oxygen levels… roaring winds… and the assured absence of help if you get into trouble.

It’s enough to kill most things.

But for those plants and animals that survive, the “test” comes with major benefits: longevity and good health.

Gualfin’s inhabitants are a small group of homesteaders and natives. They live in near-total isolation.

Up at our most remote vineyard – so inaccessible it’s impossible to harvest – an elderly woman, Elena, lived in complete self-sufficiency well into her 80s.

(She made – and I can attest to this personally – the best cheese in the valley.)

She had no daily pill regimen. (The nearest pharmacy is a day’s journey.) And she rarely saw a doctor. Around these parts, if you fall ill, the trek to see a doctor is more dangerous than toughing it out on your own.

In any case, the people here seem to stay active and live far beyond what their rough-hewn lives might dictate.

For scientists, the latter observation would scarcely be surprising. “That which does not kill you…” is actually a scientific fact.

Stressing yeast with short bursts of extreme heat and cold allows it to live up to 30% longer. And studies have linked “caloric stressing” – aka fasting – to longer life spans and less disease.

Of course, we aren’t all going to pack up and move to the edge of civilization to battle it out against the elements. But that’s where wine comes in…

At more than 8,400 feet above sea level, in the most extreme growing conditions on earth, malbec grape vines growing in the Calchaquí adopt some unusual characteristics.

They become ultra-efficient at concentrating the few nutrients they have. They become ultra-resilient against potential bugs and threats. They say there are vines around that must be more than a hundred years old. I believe it…

And the benefits of this struggle against nature don’t just stay in the plant.

They carry on through to the wine… and the wine drinker.

You Can “Inherit” Longevity Through Wine

It’s a myth that red wine is good for your health because it contains antioxidants.

The real health benefit of red wine comes from a part of the vine known as the “sirtuin pathway.”

It’s a pathway that springs to life when the vine comes under stress.

The extreme-altitude vineyards of the Calchaquí Valley cling to the edge of survival.

They survive because sirtuin activation floods the grapes and their skins with a plant chemical known as a flavonoid. This thickens and darkens the skins to protect the grape. You can spot a wine that has had a surtuin activation like this because the wine is so opaque, it almost looks black. 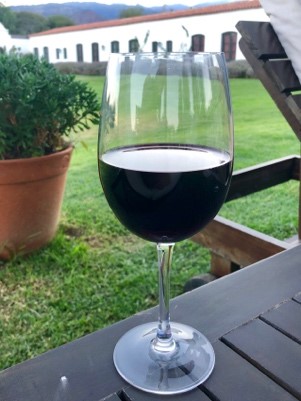 The near-black color of our wine is a telltale sign of high flavonoids.

We have done no official tests. But the grapes we grow in the Calchaquí Valley may have one of the densest flavonoid concentrations of any grape in the world. It could be 10 times that of other grapes.

Here’s what that means for your health…

When you drink that inky red wine, those flavonoids pass into your body. Once there, they activate your own sirtuin pathway.

Effectively, the resilience of the plant – hard-won after years in the wilderness – is passed on to you!

When you drink a glass of extreme-altitude malbec from the Calchaquí Valley in Argentina, your body quite literally experiences what it is to live on the open range 5,000 miles away, at nearly 9,000 feet above sea level.

And look, sirtuin activation is far from “folk science.” In fact, it’s beginning to attract significant investment from some of the biggest names in medicine.

Investors include pharmaceutical giant GlaxoSmithKline (to the tune of $720 million), as well as MIT’s head of aging.

Activating your sirtuin pathway may be a key step in the fight to slowing aging and fighting off disease.

“That which doesn’t kill you…”

Scurrying up the embankment after her runaway horse, we found my brother’s fiancée on the ground, shaken and bruised, but still among the living.

Wiping away the tears from the shock, she got back up. The mare stood close by with its head bowed sheepishly. (That which is not useful way out here… is dinner.)

After a first fall, a novice rider can be reluctant to get back on. But there wasn’t much choice. Even if we had a phone to call for help (there are no cell towers or phone lines for at least 50 miles), the path was impassible by car.

My brother helped his fiancée back on her horse. She took a deep breath, nodded her head and urged the mare forward.

The rest of us exchanged glances… and smiled. She had passed the Gualfin Test.

Note: Will you pass the Gualfin Test? We have a limited number of bottles of extremely high-altitude wine from the Calchaquí Valley. It’s never before been available in the U.S. And it’s packed with sirtuin-activating flavonoids (one of the densest concentrations in the world).

You can reserve yours by going here. Supplies are limited and will sell out. So I can’t guarantee you’ll have access to these rare bottles if demand is high. Go here to reserve yours today.

Don’t understand what’s so dangerous about inflation? Think of it this way...

If this world is as green as it says it is, the price of everything is going up...

Something is wrong. And it has everything to do with our money.