The Simple Anatomy of an Options Trade

When we first moved to Alaska, life was tough.

We were 3,347 miles from our closest friends… We were hungry… tired… and nothing was easy.

We know lots of folks who would have tossed up their hands and went back to the “real world.”

We set a mandate for ourself. Give it 10 days, we said. And if it’s still miserable, we’ll reconsider.

Obviously, things changed. They got better. And had we not set that benchmark – had we not forced ourself just to hold our nose and jump in – we wouldn’t be writing you today.

This little passion project that has grown so big never would have gotten started without that decision to simply give it a try.

That’s why when we wrote you on Friday and included the words “just try it” in the message… we meant it with all the earnestness, sincerity and humbleness of a man who’s stared into the snowy mountains and wondered what the hell he’s gotten himself into.

If you recall, we wrote of something very specific last week.

We didn’t beg readers to try just anything… We told them to try an investment strategy that too few folks will ever give a whirl.

It’s a topic that stirs lots of questions… hence our robust mailbag piece on Friday.

But it’s also a topic that makes lots of folks a lot of money… hence our pleas to just give it a try.

But before you make your trade… let us show you the anatomy of a trade.

This is important. It’s critical Know-How.

We’ll start with the latter, using our most recent example – a trade that led to a quick 298% gain.

Using our stock selection system, we determined that shares of Eldorado Resorts (ERI) were almost certainly set to rise.

Here’s what we told subscribers in mid-December:

From a technical standpoint, the company is set to zoom higher.

Shares are doing exactly what so many of our triple-digit winners have done over the last few months. They’re bouncing off their mid-channel trend line. And they are gaining more and more strength with each fresh bounce.

We recommended folks grab some shares… and purchase the company’s March $55 calls.

Why those options, though?

We wish the answer were more complex. We’d be able to write a thick, high-priced book on the subject. But, alas, we’re a simple man with a simple trick up our sleeve.

It’s like we said last week… Most of the options we recommend require the stock to move less than 10% before they’re guaranteed to have some value.

With the Eldorado trade, we went even more conservative.

The stock was trading for just $53 when we recommended it… so we went just 4% higher and chose the $55 options.

No crazy formulas. No long equations. And no need for a calculator.

That stuff may justify four years in a Ph.D. program… but it won’t do much good in the real world.

That’s half the options equation. What about the other half… timing?

This one is even easier. After years in the trading biz, we know there’s a bit of a sweet spot when it comes to options pricing. The rationale is complex (it does involve some serious – but fun – math), but the outcome is reliable and repeatable.

Of course there are variables, but if a guy spent his whole life buying options that are less than 10% out of the money and expire in three months… well, we’d bet he has a nice boat.

In fact… reader V.G. wrote us last week and said he’s made about $175K following our advice. He sent a picture of the new dock he’s building at his house… so he can tie up his new boat!

Remember, a whole industry has been born out of making investing seem complicated and impossible for the do-it-yourselfer. It’s quite lucrative. But with today’s online platforms, trading is super simple.

To prove it – and to fulfill our mission of sharing critical Know-How – we filmed a quick video that walks you through the entire process.

And to underscore how simple it is… it’s an eight-minute video, but the actual trade takes less than four minutes.

Give it a watch… 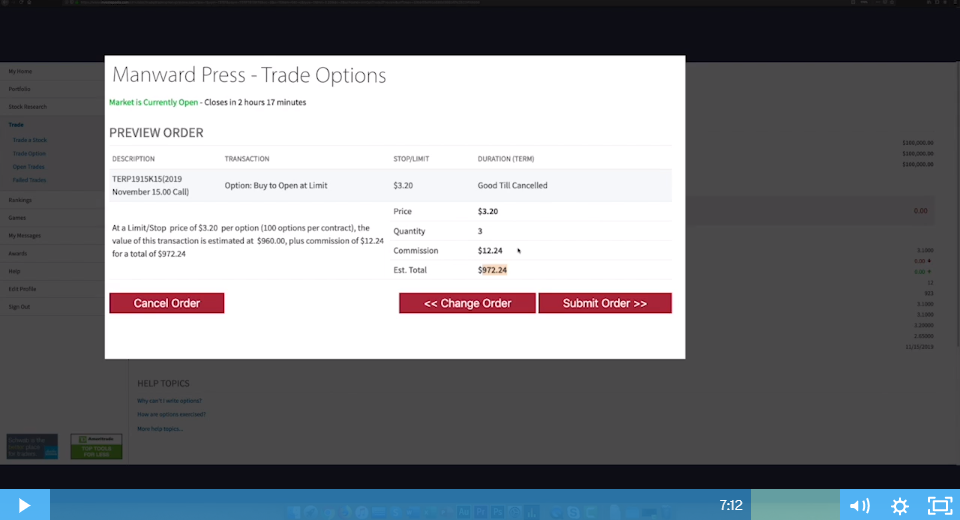 This stuff isn’t hard. All it takes is a bit of initiative and the understanding that not every trade is a winner.

But keep it simple and show some persistence… and we’re confident you’ll soon be locking in triple-digit winners with us.

Keep an eye on your inbox.