We were out late putting the finishing touches on our irrigation system. Ironically, the rain is what finally sent us inside and off to bed.

The 4 o’clock alarm seems to be coming earlier and earlier these days. But we wouldn’t trade it for anything.

We’ve got work to do… especially this week.

Like we said yesterday, our mission of spreading Know-How and fighting for Liberty has us headed to the FDA.

And if the messages in the mailbag are any clue, we’ll have a legion of supporters wishing us the best of luck tomorrow.

We’ll share more of the notes we received and what we hear and see from the FDA in the coming days, but there’s one note we must share with you today.

It comes to us from reader B.O.

I believe that in your introduction or conclusion you should reflect the quote you used the other day attributed to Benjamin Franklin: We are all born stupid, but one must work hard to remain stupid.

Few words can get to the heart of what we’re up to as quickly as those from our old pal Mr. Franklin (perhaps that’s why we penned an easy-reading book on the man and his thoughts).

Our Founding Fathers were lucky.

They didn’t have dumb things to waste their time with.

They never spent an entire Saturday binge-watching Netflix. They didn’t dull their minds with colorful games on their phones. And they didn’t waste their nights comparing their dreary lives with their neighbors’ on Facebook.

Instead, they spent their days thinking and writing.

We read their work a lot. It informs much of what we do… especially inside this little project of ours.

Take, for instance, the words in this letter penned by James Madison. He sent it to W.T. Barry – a leading politician in Kentucky – in the summer of 1822. 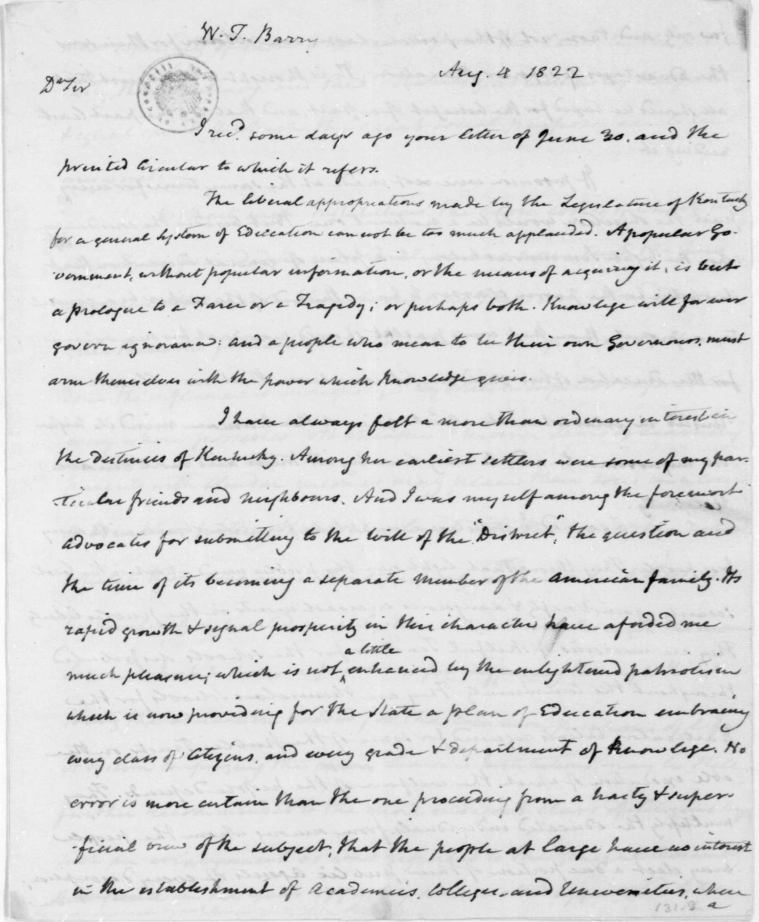 If you can read the classical penmanship, you’ll find some interesting words right at the top.

But the scribbles are tough, so we’ll make it simple for you.

Here’s a shot of the good stuff…

A popular Government, without popular information, or the means of acquiring it, is but a Prologue to a Farce or a Tragedy; or, perhaps both. Knowledge will forever govern ignorance: And a people who mean to be their own Governors, must arm themselves with the power which knowledge gives.

There are a couple of big ideas in that paragraph.

Both are hugely important in today’s world.

The first sentence sends an arrow through the heart of the modern idea that running a government by the populist desire is a good one.

Madison and his brethren hated the idea.

The average person is too ill-informed, they shouted.

Without “popular information,” ruling by what’s culturally popular is a recipe for disaster.

Or, better yet, look at the jungle of lies, myths and deceptions surrounding the realm of cannabis.

Thanks to the popular message, most folks have been duped into believing it’s a gateway drug that will only get you high and lying on the couch.

It’ll mess with your mind… for sure.

But we’ve also learned cannabis has some amazing – bordering on miraculous – health effects.

Our keepers in Washington, though, aren’t all that eager to admit it.

It washes away the story they’ve been telling us for some 80 years.

That’s why it’s vital we keep reading what Madison has to say.

The nation’s fourth president goes on to write that if we truly want to govern ourselves – what we deem the essence of Liberty – we must arm ourselves with knowledge.

We must seek and find the truth.

Madison, we humbly say, would love what we’re up to.

And we figure he’d hold the door for us tomorrow as we take our notes and our ideas to the folks at the FDA.

We are armed with the power of Know-How. We’ve done our homework and uncovered the truth.

It’s a truth that we’ve yet to find spilling from the lips of our regulators.

But we’re going to make sure it trickles into their ears.

Amid all the chaos in America today, there’s an old familiar tune worth repeating.

The Federal Reserve is about to do something stupendously insane. It’s about to put a gun to the free market’s head.