Thanks to the convergence of two key events, a critical slice of the tech world is far outpacing one of the hottest stock markets in years.

The big gains are likely to continue.

We’ll start with a topic we’ve covered a lot… cash. As we write to you this morning, the amount of cash circulating through the American economy is near historic highs.

From this time last year, the amount of paper money stuffed into wallets, safes and coffee cans under old trees is up by more than 15%.

There are many reasons why.

First off… the fine folks in Washington have been stuffing mailboxes with money. Lots of folks took that freshly printed cash and held on to it.

They stashed away all they could because they’re scared.

Banks closed earlier this year. Lockdowns kept folks stuck at home. And now folks are climbing the walls of the Capitol. Having a thick wad of crisp $20 bills at home creates security.

After peaking at 35% last spring, the nation’s personal savings rate now stands at an impressive 13%.

But we know that figure won’t last.

Americans aren’t savers. Too many folks would rather have iPhones today than security tomorrow.

Historically, our savings rate is half of what it is today – just over 6%.

The road from a 13% savings rate back down to 6% isn’t paved with gold.

No… it’s lined with silicone.
[mw-adbox]

Take the recent news from Volkswagen. It’s not great for the carmaker. But it’s fantastic news for the semiconductor industry.

The German carmaker announced it will produce 100,000 fewer cars in the first quarter.

Honda is reporting the same news. It’s cutting production too.

As a whole, the industry may have to cut output by 10% to 20% per week as soon as February.

It’s not doing it because demand is waning. It’s just the opposite.

Demand for semiconductors is so high across the globe right now that suppliers can’t get enough materials.

And here’s where our stories combine.

Because folks have been locked at home… offices have moved into basements, attics and living rooms… and folks have pockets full of free money, electronics sales are through the roof.

It’s created a massive demand for semiconductors… and supply can’t keep up.

The car industry is getting hit the hardest, as it’s historically been a low-margin business. It can’t afford to outspend companies like Apple (AAPL) or Dell (DELL). Its orders get pushed to the back of the line.

The world will get more iPhones… but new cars will have to wait.

The winner in all of this is not the consumer. Prices – as we’ve written oh so often in recent months – will rise. Supply and demand will dictate it.

That means the big winners are the suppliers.

One quick look at the PHLX Semiconductor Index tells the tale… 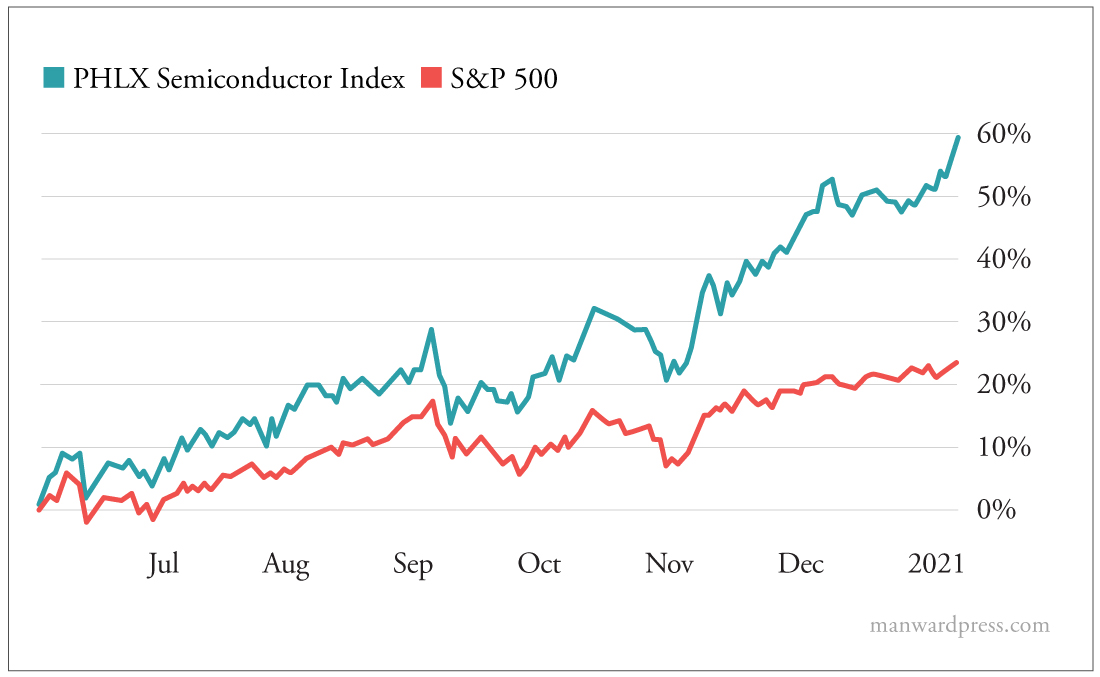 Since June, the index of the world’s 30 largest semiconductor makers has outpaced the S&P 500 nearly 3-to-1.

The run is likely to continue from here. In fact, it’s likely to accelerate.

Traditionally, after all, a peak in cash hording represents a bottoming of the economy. As more folks expect things to get better or at least stabilize, they’ll start spending that cash they have buried out back.

Combine that with the very high prospects of even more free money getting stuffed into mailboxes and all signs say the soaring demand will continue.

We certainly don’t need any more evidence in our Dow 100K theory… but here it is.

P.S. Speaking of cash… have you seen our latest presentation on its pending death? As Washington tightens its grasp on the economy, there’s one thing it’s desperate to control… your cash. The latest plan could begin to unfold as soon as a secretive meeting kicks off in March. All the details are here.

Are you investing in semiconductor stocks? Tell us about your wins at mailbag@manwardpress.com.