Is the COVID trade over?

Not according to the folks in charge of the nation’s money.

And this time… we agree.

The president of the Kansas City branch of the Federal Reserve, Esther George, told us this week not to worry about rising interest rates.

“I don’t know that, based on the levels that we’ve seen so far, that [rise] poses any challenge to the Federal Reserve’s monetary policy,” she said.

“I don’t think the rise we’ve seen is concerning to me at this point, but we’ll keep watching it to see whether we’re getting other signals about tightening financial conditions.”

The Fed, of course, doesn’t want rates to rise nor does it want “financial conditions” to tighten.

The nation’s fate depends on truckloads of free money and loose policy to pull it out of the trap it’s waltzed into.

As the rate on the 10-year Treasury climbed above 1.3% this week, Uncle Sam’s debt is officially trading at pre-pandemic levels.

The flight to safety that had investors rushing in to bid up the price of Treasurys and push down their interest rate has waned.

Wednesday, for instance, was a key day in the nation’s debt market. That’s when the Treasury auctioned off some $27 billion worth of 20-year bonds.

The bid-to-cover ratio, which measures the dollars bid for every dollar of debt offered, dropped to a record low of 2.15.

One line from a Jefferies analyst sums it up…

And so it goes… The market tries to do what a healthy market must do… and the Fed dives in to mangle it all up again.

Jay Powell is set to give a speech next week.

He’ll likely have a checkbook hanging out of his pocket as he promises to swoop in to buy more debt and push rates lower again.

The last time rates rose, you may recall, Americans lost a lot of money.

Powell’s not ready for it to happen again.

But really, it’s not the Treasury market us oh-so-ordinary investors must watch.

To see where this mess is headed, there are two other key rates we need to keep an eye on.

The first, of course, is what’s dubbed the “real rate.” That’s the Treasury rate minus the rate of inflation.

When we look at that number, we see just what it is the market is working to adjust for… rising prices.

Subtracting the current rate of inflation from the 10-year Treasury, we get a figure of negative 0.92… the same ultra-low level we were at a month ago.

The near-record-low figure gives us a clue that the market is not necessarily pricing in a stronger economic rebound… but is more focused on rising inflation.

A $2 trillion stimulus bill… plus whispers of all sorts of new (and expensive) programs will do that.

The other key number to watch is mortgage rates.

There’s good news on that front. They have not yet tracked Treasury rates higher. They’ve been flat for two weeks straight. 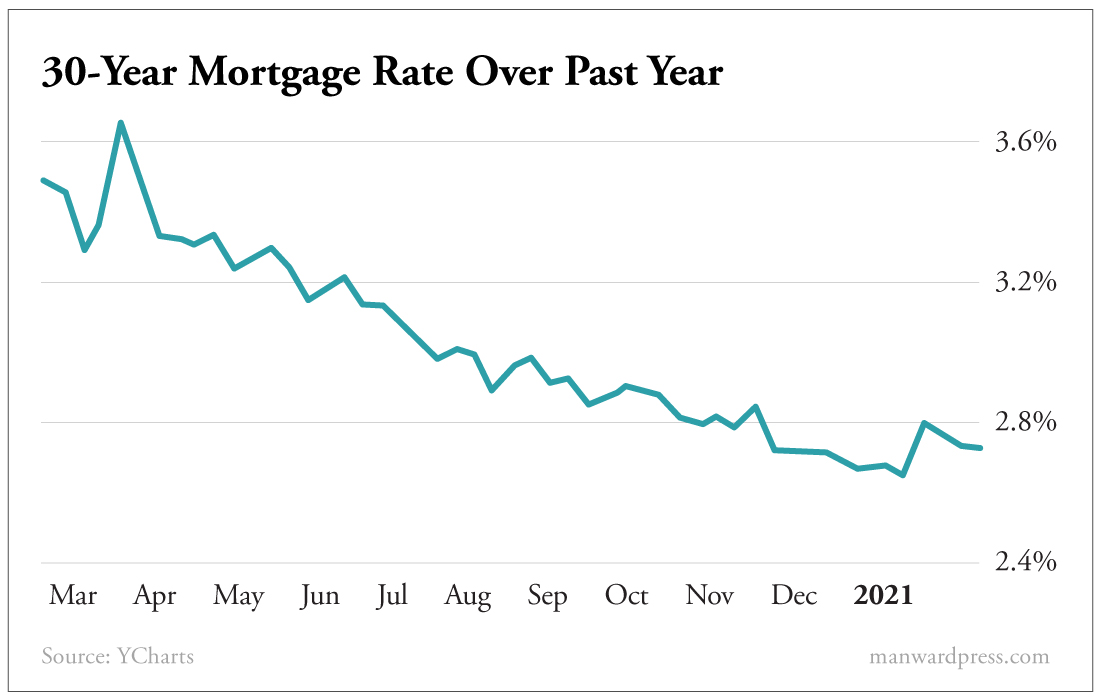 Again, it’s a sign that most folks believe the recent rate climbs are not the start of a long-term trend.

If either of these rates begins to climb appreciably, then it’s time to pay attention.

For now, our Modern Asset Portfolio remains solidly in its “negative real rates” category. That means we overweight our holdings to buyback stocks, tech leaders and cryptocurrencies.

As you likely know… it’s paying off handsomely.

Our crypto play in Manward Letter rose to another fresh high yesterday… a gain of 187% since October.

We’ll watch Powell and the 10-year. But we have a feeling his friends at the Fed are about to get out their checkbooks, start another bond-buying frenzy and push yields lower again.

Watch for it next week.

It will prove the free-money trade that the COVID crisis kicked off is far from over.

How have low interest rates affected your savings and investments? Tell us about it at mailbag@manwardpress.com.