We’re just a bit more than 24 hours away from the big event.

As last check, some 40,000 folks have committed to attending tomorrow. That’s roughly the capacity of Wrigley Field (if folks were actually allowed in stadiums these days).

It means we have the opportunity to share our latest research and our new breakthrough trading strategy with tens of thousands of folks.

It means we will show a huge audience the very best way we know of to make big money in this market.

And it means… bottom line… we will change lives.

During testing, the strategy we’ll reveal got us into 15 long plays. Fourteen were winners… averaging peak gains of 138% in just 26 days.

The timing to put this strategy to use could not be better.

Just yesterday, The Wall Street Journal published a report on something we’ve been tracking for months… a surge in retail investing.

In many ways, it’s good news.

Folks are looking out for their own financial well-being. They’re piling into a self-sufficient lifestyle.

But in other ways, it’s bad news.

The realm of the self-sufficient can be a dangerous place. The critters that roam the wilderness love to eat the new and inexperienced.

The folks behind the report say that trading by retail investors is at a high we haven’t seen in a decade… and perhaps at levels we’ve never seen before (the data goes back only 10 years).

On any given day, 1 out of 5 trades is made by an individual investor. On headline-rich days, that 20% figure can rise to 25%… or more.

The good is obvious. Folks are saving for later. They’re putting their retirement in their hands and aren’t relying on Social Security – money that’s already been stolen by Washington.

The bad is less obvious.

It comes in the form of this chart… 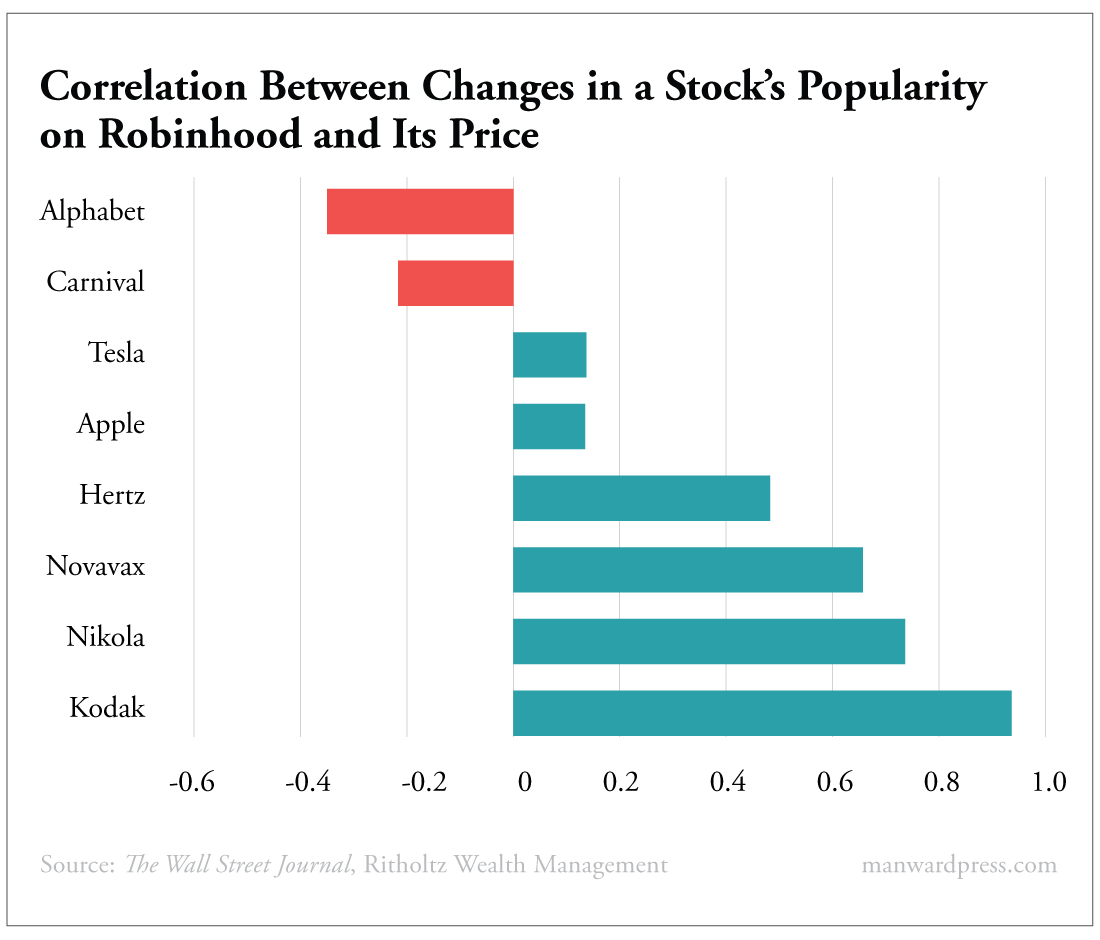 As we’ve mused about before, the popular, relatively new trading platform Robinhood is a data hunter’s best friend. It offers us all sorts of insight on who is buying what.

The chart above shows us the correlations between the hottest stocks on the platform and their share prices.

The big names like Alphabet (aka Google), Apple and Carnival don’t have much of a correlation. They’re too big to get pushed around by the little guy.

Wall Street’s algorithms and big-money funds are still in control.

But that’s not true for some of the smaller firms you may have read about in the news.

As Robinhood’s data shows, retail trading volume was largely behind the move.

For some folks, the action was great. We got a note from a friend who got in on the play after we wrote about it. He was up big and promised to buy us a steak dinner.

But not everybody got in at $2 or less.

Somewhere – likely on Robinhood – there’s a poor sap who paid $60 for a share.

Today, his stake is worth just $6.

We saw the same action from Hertz (HTZ) – the bankrupt car rental firm.

It saw its shares in a wild feeding frenzy early this summer. Folks were willing to pay more than $5 for shares that may soon have a value of zero.

The action got so hot, the company tried to sneak in a share offering… until the party police at the SEC shut things down.

Novavax (NVAX) is another great example.

In February, we wrote a report for our Alpha Money Flow subscribers. We told them we were picking up on a surge of odd trading volume at the company.

Back then, shares traded for less than $8.

Again, it was a great opportunity for the folks who got in early. We got a note from a reader saying the trade was her first-ever 1,000%-plus gain.

But again, somebody paid $189 per share for the company as the Robinhood surge pushed prices to ultra-speculative peaks.

This sort of tail-chasing action will be painful for a lot of investors. That’s why we’re hosting The Super Trader Rally tomorrow afternoon.

We want to show you our exact formula for tracking these sorts of trades… and the very best ways to profit from the action.

Not to give away too much of tomorrow’s event, but it’s all about volume.

Most folks track price. It makes sense. But in the world of Robinhood and free money in American mailboxes… price doesn’t mean what it once did.

We’ll prove it to you with one profit example after another during tomorrow’s big event.

Click here to reserve your spot at The Super Trader Rally.

P.S. Don’t forget… we will send every person who joins us tomorrow a free gift – our Trading Research Starter Kit. It contains my list of favorite brokers (Robinhood definitely is not one of them)… four tickers to buy right away… and even a couple of my favorite screeners. Click here to sign up and reserve your gift.

Mark Ford defines what it really takes to grow your wealth year after year.

We dug up an old penny last night. Boy, the stories it could tell about the value of our money...

Chuck E. Cheese has gone bankrupt. But this story has an interesting and useful twist.