Two weeks ago, we got up early to see several friends had sent messages to our phone overnight.

One sent a picture.

Another sent a link to an article.

They had read about “murder hornets” and were concerned. They know we’ve got hives and wanted to ensure we weren’t the next victim of these homicidal bees.

We laughed and told them to stop watching so much TV. Their brains are getting gooey.

The next day, we saw another grand headline…

“Coronavirus found in men’s semen. Can it spread through sex?”

Last we checked, the sensuous stuff requires breaking all current social distancing guidelines… and probably future ones. Done right, folks actually touch – like skin to skin and, oh my, lip to lip.

He’ll outlaw it… or force a government inspector into the room.

We know your fellow readers see through these lousy stories, but we hope the rest of the nation is seeing the ridiculous stretching for a story that’s happening these days.

A quick scan of internet data shows that the “murder hornet” story died nearly as quickly as it ballooned. Common sense prevailed, and the media was called out for its hype. 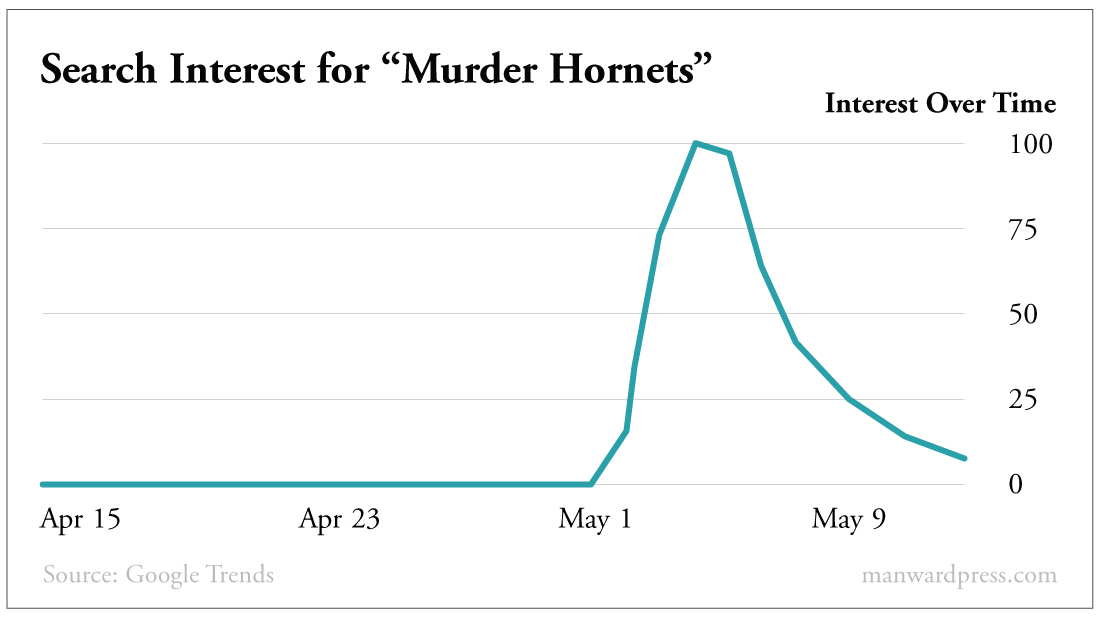 They are the here-today-gone-tomorrow headlines that, at best, confuse a nation into believing something that isn’t and, at worst, destroy lives and livelihoods.

The “drive-by media,” as some call it, fires its shots and speeds off to find its next victim.

Some of the bullets miss. But others are deadly. It doesn’t stick around to find out.

When it comes to the biggest story in years, we could list a slew of reasons America seems to be suffering worse – physically and economically – than others when it comes to the coronavirus, but it’s the ideas above that have us most concerned.

The media hasn’t smashed the gas pedal and zoomed away from the crime scene this time. It’s sitting in the driveway peppering the place with lead.

It’s story after story after story. Most are ponderous pieces with no real answers. The talking head wraps up his 30-second spot with a simple refrain. “We don’t know,” he said. “We’re still learning about this bug.”

He fires his bullets… never to be seen again.

The politicians, of course, feed on this rhetoric. They sort through the stories and grab ahold of what gets the most attention.

In perhaps the most genius move of this crisis, the politicians have dubbed this mess a “war.”

Here in Pennsylvania, the governor went so far as to say that the businesses that are reopening are “cowardly” and likened them to deserters in a battle.

“We’re all fighting this war together,” he said. “We can’t run up the white flag.”

It was a strong move… at least as far as politics are concerned. Clearly, he’s read the right snake-charming books.

But if he and his compatriots in power want to play the war game, shouldn’t we lowly citizens?

Can’t we be conscientious objectors?

Can’t we just back away from this war and use our strong morals as reason enough to keep out of it?

We sure think so. And we like to think all those other wars we’ve spent so many good men on back up the position.

If you agree, here’s how we do it.

There’s a way to fight back without spreading germs, risking the lives of the susceptible, or even breaking any laws or emergency decrees.

Instead, it has everything to do with that chart we showed you above.

The media world thrives on eyeballs. It needs viewers and clicks. The more we view… and the more we click… the bigger and greedier it gets.

Ratings have been through the roof during this crisis. Americans are locked up and glued to their TVs. The media knows it and feeds on it.

So when COVID-19 cases in a small town in Kansas go from two to four… the story gets even more clicks when the media tells us cases doubled overnight.

When a town in Texas has a barbershop open up… the media deems the next case in the county proof that it’s America’s newest hot spot.

As conscientious objectors, we can’t fall for it.

In fact, as objectors, we must – by definition – not take part in it.

We’re convinced that politicians and the media that feeds like parasites on them are no different from a 6-year-old repeating a foul word in the back seat of the car.

If you ignore him… he’ll stop.

Right now, little Johnny and his sister are in the back seat cussing up a storm. They thrive on the looks on our faces reflected in the rearview mirror.

They’ve got our full attention… and they know it.

If we’d merely turn our gaze, they’d shut up or at least tone it down.

But no, we keep watching.

So Johnny tries something new… something even crazier. Murder hornets!

The headline writers and the skim-the-surface pundits are getting rich as we click on their headlines and tune in to their daily “war” broadcasts.

As you know, one of our core beliefs is the infinite value of Know-How. We’d never tell you to walk blindly or ignorantly into the world.

But we must focus on the ideas that matter.

We must have the skills to discern what’s important and the fortitude to ignore what isn’t.

The easiest way to fight this war is to purposefully sit it out.

It’s okay to be a conscientious objector.

It’s the moral thing to do.

Mark Ford shares one of his favorite income opportunities that anyone can get into... and become rich in the process.

Stocks are soaring, and Washington is doing anything it can to keep the party going...

Is COVID-19 speeding up the death of cash? Check out this sign spotted at a huge chain store...