We heard from our old pal Alan Greenspan on Tuesday.

You may recall that he’s the puppeteer who held the economy’s strings before Bernanke… before Yellen… and before Powell.

“Shocked disbelief” is how he infamously described his thoughts in a rousing interview where he admitted his mistakes that helped fuel the 2008 crisis.

And now the 93-year-old is back in the news.

There’s no reason U.S. debt can’t come with a negative interest rate, he tells us.

“Zero,” he says, has no real meaning for the bond market.

It’s only in our head – purely psychological.

But Can We Make Money?

The money world is breathing into a brown paper bag this week. It’s lost its breath talking about the yield curve’s inversion.

“Tell them it’s gonna be hell,” we can imagine the TV producers are whispering into the ears of the talking heads. “Remind them what happens next.”

All this talk is great for ratings. But it’s not so great for those of us who are fans of Know-How.

There’s a lot that isn’t getting discussed in the sound bites.

We don’t disagree with much of what’s being said. But we do wave our hand in the air, eager to tell the other side of things… the story nobody’s bothered to cover.

It’s fascinating. And understanding it could put some jingle in your pocket… Alan Greenspan kind of jingle (he’s worth $20 million).

You see, few folks know it yet, but the rules of investing have changed since “the undertaker” (that’s Ayn Rand’s nickname for Greenspan) left office.

Take a look at this chart. It’s fascinating. 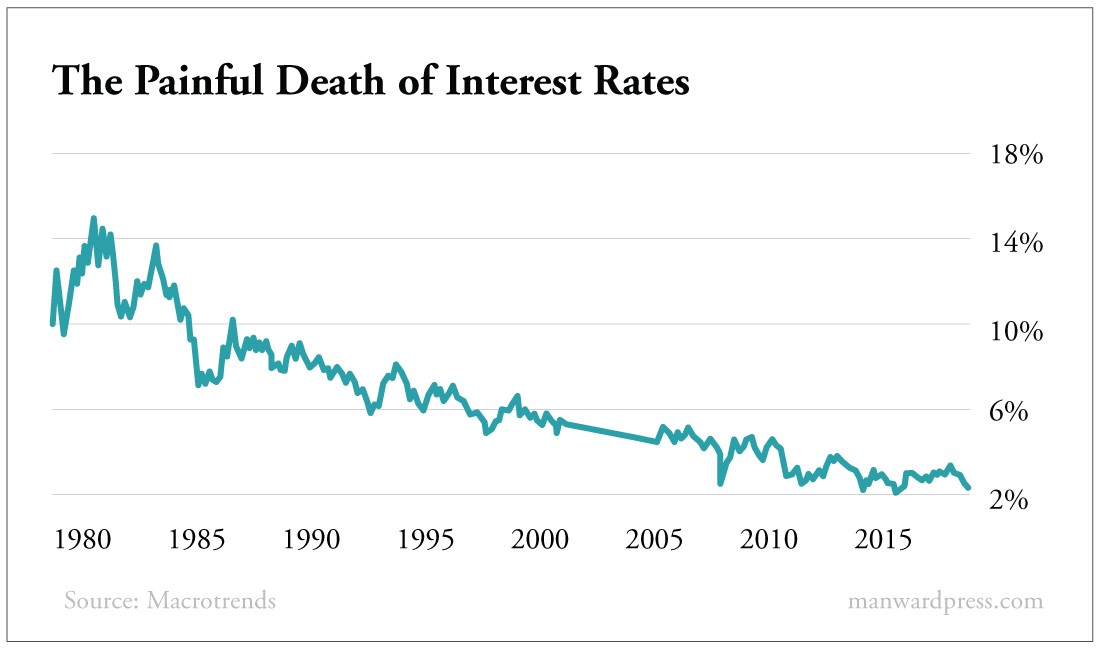 It shows the death in real time.

It’s also when a lot of the economic theory that we take as gospel today was written and discussed.

Thirty years ago, the notion of retirement was just becoming a reality for many Americans. Prior to that, shorter life spans made the notion of many “golden years” a dream most folks never realized.

The average life expectancy was just 71 years in 1980. That means there wasn’t much need to spend a lifetime saving for retirement.

In fact, retirement was short… if it ever happened.

That’s why most Americans needed some sort of incentive to put their money away. Their natural inclination was to spend it today… not save it for a retirement that would, at best, last just a few years.

Mr. Market found a way around this conundrum.

As any good banker will tell you, money goes where it’s treated best.

And if a banker wants us to deposit our cash in his bank or buy the bond he’s pushing, he has to create an incentive that keeps us from spending it.

That’s where interest rates come in.

The banker simply pays us to save.

It’s the simple phenomenon that modern economic theory is based on.

But the money minds of yesteryear missed something important. They never bothered to add increasing life spans to their prized equation.

As the average life span extends well into the 80s and 90s today, folks have a strong natural inclination to save when they’re younger. They know they won’t be able to work at those ripe ages. So they must save, and they must invest.

It’s important to note here that personal savings rates in the U.S. have more than doubled since Greenspan took down his shingle.

It proves that, once again, money goes where money is treated best.

With so many folks dumping money into stocks, bonds and savings accounts over the last decade, the market (with the help of the Federal Reserve and its friends in Washington) has been forced to incentivize folks not to stash their money away.

After all, if we don’t spend our money… the economy slows.

It’s why today’s puppeteers at the Federal Reserve are in a trap. Each time they raise rates and incentivize Americans to save, the economy throws a fit.

That’s why it’s not surprising that interest rates and life expectancy have moved almost perfectly in the opposite direction over the last 40 years.

It proves that current financial theories are wrong. They were devised decades ago and have not kept up with real-world trends.

We can no longer assume that consumers need an incentive like interest rates to save. These days, they do it simply so they’re not broke in retirement.

In fact, in an astonishing turnaround, many retirement-minded folks now need an incentive to spend.

It means that as long as life expectancy is climbing… interest rates will not just level off at zero. They’ll go below zero.

We dare him to look in the eye of the American investor and say that. For most Americans, this trend is far from harmless.

That’s why we recently put together a full-length presentation on what’s happening and how you can overcome the certain calamity ahead.

It details how a September 18 decision could ignite a firestorm for the markets… and prudent American savers.

Learn the simple five-step protocol for sidestepping this mess by clicking here.