Good timing. Within mere days of Janet Yellen giving the nod for a national digital currency… the whole system goes down.

We were on a webinar with Wall Street bad boy and Washington outlaw Anthony Scaramucci Wednesday night.

The topic was Bitcoin.

We were prepared to ask the SkyBridge Capital founder a tough question… the difference between the Trump and Biden administrations’ opinions on crypto.

But we didn’t have to ask it. Scaramucci ran ahead of us.

He said he hadn’t paid much attention to Bitcoin or crypto until he went to Washington. Once he saw how the sausage was made… he knew the market would someday need an alternative.

Just two hours before he made those comments, we went to the Federal Reserve’s website and saw this… 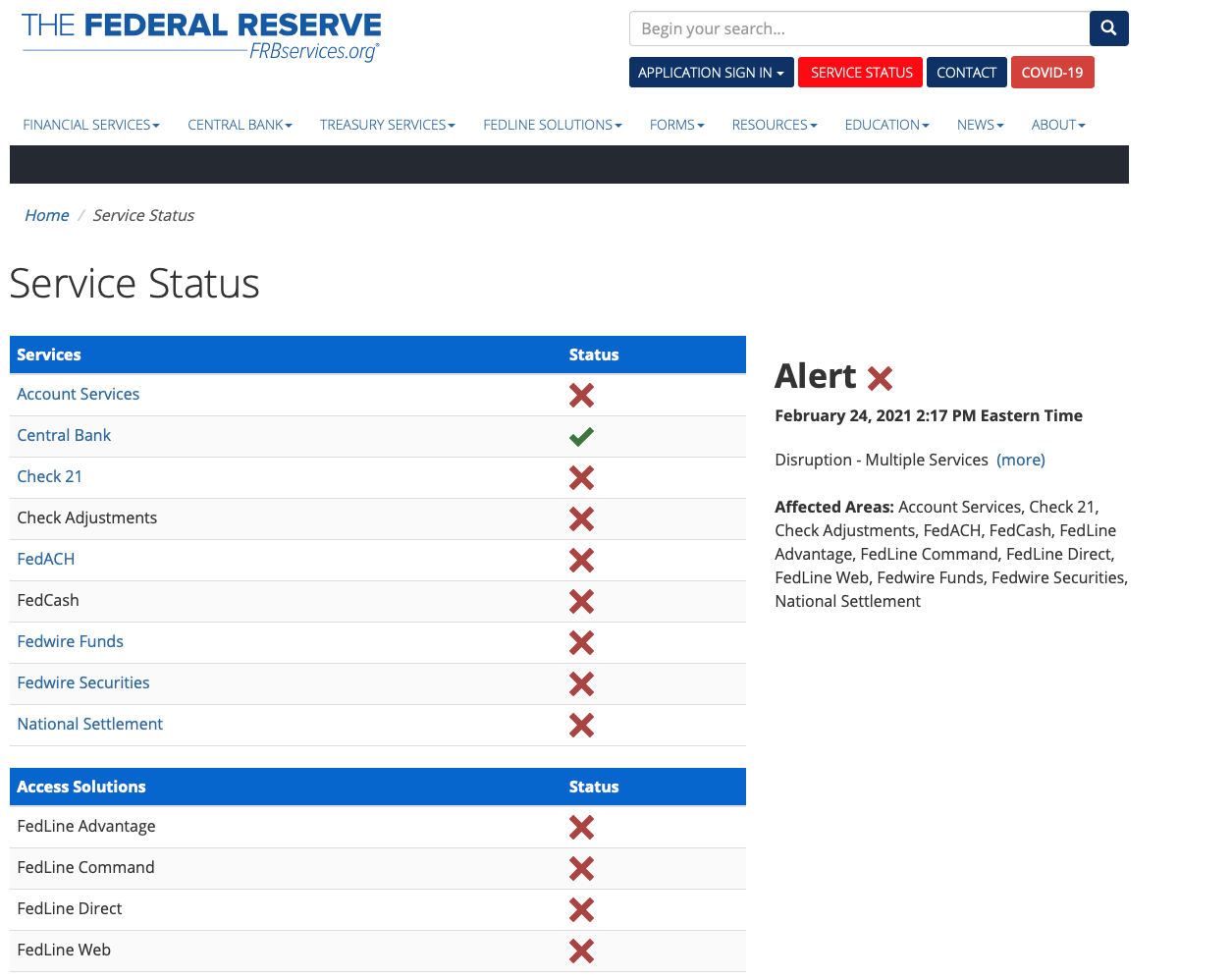 Nearly every system was down… an “operational error,” they said.

We’ll never know whether it was as serious as a hack by an enemy… or an intern spilled his Mountain Dew.
[mw-adbox]

In all, more than $3 trillion worth of payments cross these systems each day. For a couple of hours this week… not a penny changed hands.

In the grand scheme of things, it’s not a big deal. Computers fail. The system was fixed within a couple of hours, and most folks never noticed.

But when we start to add up all the individual pieces of this story… the plot gets clear.

The Federal Reserve is having a harder and harder time controlling interest rates. It’s forced to buy massive amounts of bonds and mortgages just to keep things from going bonkers. This week, as rising rates prove, it’s having a tougher time than ever getting the job done.

A digital currency would go a long way toward solving the problem.

Over at the Treasury, Yellen likes the idea too.

It’s a lot easier to manage fiscal policy when money can be added to (or subtracted from) a bank account with the push of a button.

In our recent U.S. News & World Report interview, we told the reporter of the import of such a system if Washington truly wants to go after the dastardly policy that is modern monetary theory.

And now… just this week, Yellen said she’s open to the idea – the first time she’s publicly endorsed such an idea.

“It makes sense for central banks to be looking at it,” she said. “We do have a problem with financial inclusion. Too many Americans really don’t have access to easy payment systems and to banking accounts, and I think this is something that a digital dollar – a central bank digital currency – could help with. I think it could result in faster, safer and cheaper payments.”

Don’t be fooled, though. This has nothing to do with inclusion.

The Future of Money

Again, the Fed lost control of its system this week. Payments were halted. The old system showed its age.

Crypto fans were quick to point out an alternative.

A decentralized currency like Bitcoin requires no central server. If one computer goes down, others are there to instantly patch the holes. The blockchain never sees a blip.

It’s like Scaramucci said. Currency is little more than technology. It’s a replacement for the barter system.

Right now, our technology relies on green paper and a computer system designed decades ago.

And all signs say a replacement of the old is coming soon.

What it looks like, truly nobody knows. But it will be transformative. It will involve the blockchain, and it will involve some sort of cryptocurrency – and most likely several of them.

It took Scaramucci just 10 days in D.C. to turn on the system.

Clearly, the view is not pretty from the inside.

After what we’ve learned this week, you can bet it will be changing soon.

P.S. We recently recorded a presentation about the “death of cash.” If you own gold or are thinking about buying some… you MUST watch it. What could happen as early as March 17 could have huge consequences for your money and your wealth. Here’s a link.