We’ve got an idea for a new book.

We don’t know whether we have the time to write it, but somebody should. The idea is simple. It would practically write itself.

Somebody needs to write down all the things our culture has learned over the last six months. “The ‘rona,” as the kids are calling it these days, exposed some powerful things about our nation and our economy.

We’re afraid that if they’re not written down, they’ll be forgotten in the next news cycle.

We’d go on (this book could be inches thick), but you get the idea.

Plus, we want to share something else many Americans are learning these days.

Take a look at this picture we took recently. It is from a huge chain store. 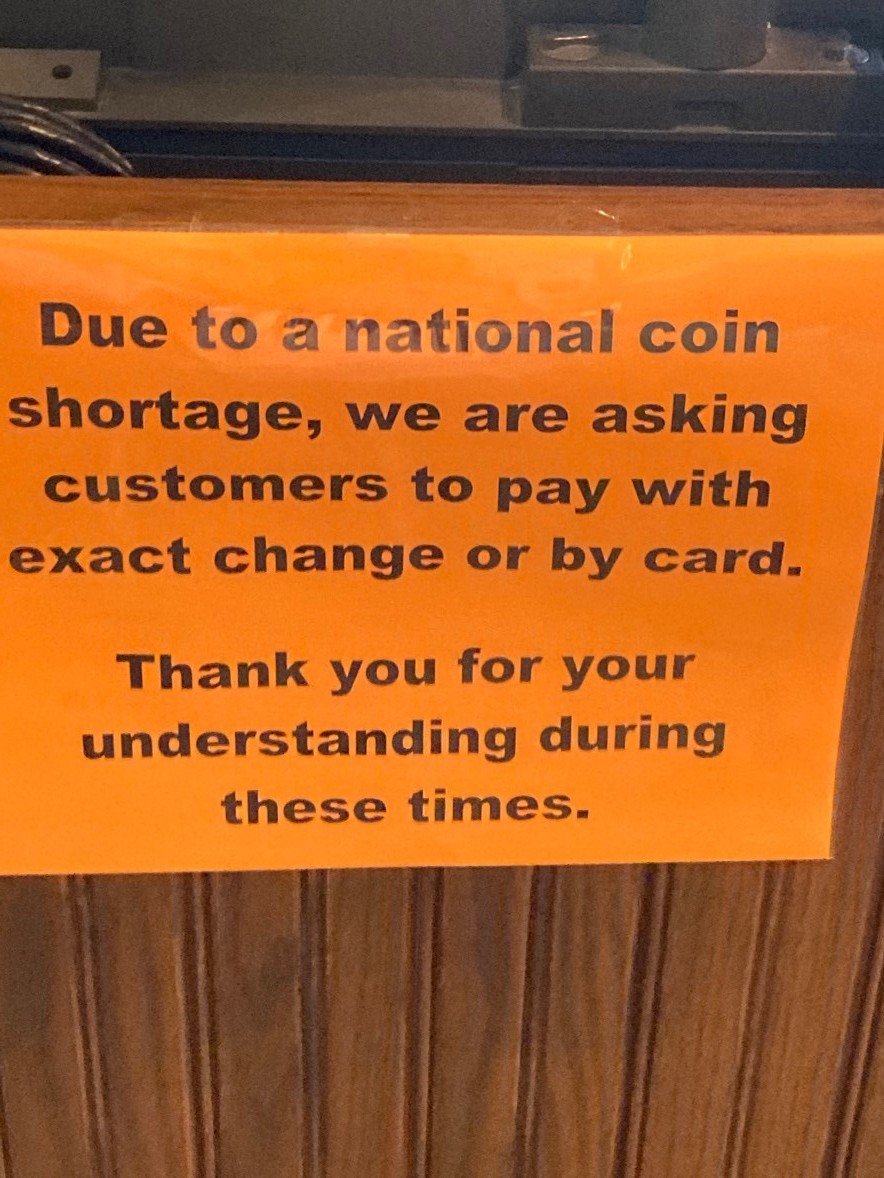 Strap on a mask and do some shopping and you’ll certainly see a sign like this. They’re all over the country. And they’re teaching Americans another valuable lesson.

Our monetary system is old, outdated and works best when it’s inches from failure.

When Money Gets Sick

What’s happening now is another unforeseen (but quite predictable) outcome of the coronavirus panic.

Coins are in short supply.

Many news sources are saying it’s because the mints have shut down due to the virus. That’s true. But it’s far from the full story.

This is a distribution issue.

Think of the nation’s money system like the letter T. Consumers, stores and anybody who actually uses coins form the horizontal line at the top. That’s where coins change hands.

The vertical line starts with banks at the top and the Federal Reserve at the bottom.

If banks have excess coins or need some more, they don’t call the store down the street or barter with the bank across town.

No. That’d be too simple.

Instead, they must push their change down to the Fed.

They call up an armored truck. It picks up the coins and takes them to the Fed’s vault. There, they are counted and sorted and, if things go well, shipped back up to another bank.

That system is broken right now.

Many bank lobbies are still closed. The money can’t flow where it needs to go.

But the news isn’t all bad.

In fact, something quite good is happening. It’s something we’ve seen a lot these days.

It will surely be a big theme in our book.

Store owners are skipping their banks. They’re creating their own system and going around the obstacle.

Laundromat owners are trading their excess coins for cash. Coffee shops are working with grocery stores to get the change they need. And companies like Coinstar are becoming the new kings of the industry.

But here’s where we worry.

We worry folks will get used to this idea that money is scarce and its digital version is an equal alternative.

We fear folks will be fine with signs like the one above and the rush to a cashless society will only gain speed from here.

Someday – perhaps soon – we won’t need signs to tell us physical money is in short supply. It’ll be assumed.

After all, this virus mess has taught millions more Americans about a powerful idea. They learned the government would love to control their money.

It wants to put it directly into your bank account. It wants to remove it when necessary. And, someday soon, we’re absolutely convinced it’ll use this newfound skill to speed up and slow down the economy.

There are a lot of lessons to learn in all this. The way our money works – and the many ways it can fail – is a great one. But there’s one idea that binds it all together. We hope you’ve caught on.

Ultimately, this is a tale of Liberty.

The nation is finally learning just how valuable it is.

And we pray it learns it’s worth a whole lot more than a few coins.

P.S. We recently published a Death of Cash Survival Kit. It details everything that’s going on, plus a hot stock to take advantage of what’s happening and a new way to use gold when you shop instead of paying with physical cash. All the details are here.

What lessons have you learned over the last six months? We’d love to hear them. Drop us a line at mailbag@manwardpress.com.

Is our country really going broke... or are our priorities just all wrong?

In 2008, a housing crisis brought down the economy. In 2020, it could bring down capitalism.

Gold’s having a great year... and it’s proof that another stimulus isn’t going to fix what ails us.