Today is a big day… a huge day for Liberty.

We’re not sure whether to bow our head or hold our hand over our heart.

Shall we cry or shall we rejoice?

Mankind has done a lot of great things over the last 75 years. Huge buildings, incredible medical breakthroughs and instant global communications are all on the list.

But today, we both celebrate and mourn one of man’s greatest accomplishments.

Shortly after midnight on this day 75 years ago, some of the bravest men to ever sew an American flag to their sleeve began streaming out of airplanes.

The quiet solitude that surrounded them as they helplessly drifted toward enemy territory would be the last peace many of them would ever find.

Meanwhile, just a few miles to the west, some 16,000 Allied troops steamed toward the beach. A vast armada of men and machinery followed in their wake.

At daybreak the soldiers jumped into the English Channel’s cool waters and waded into hell’s hot fury.

The Bad Deeds of Good Men

It was an invasion that took months to plan. It was carefully timed to take advantage of the moon, the tide and the cover of darkness.

But there was something else driving our boys to the beach that sunny, 59-degree day…

Something that’s vital for us to praise and honor on a day like this.

You see, as the first men who stormed the beach piled up as lifeless obstacles for the troops behind them, the waves of Liberty-minded invaders knew they were in trouble.

Death was calling… and he refused to leave a message.

Some were shot not once or twice, but several times that day. They kept pressing – thinking not of what was ahead of them, but what was behind them.

The invasion on June 6, 1944, was the greatest accomplishment of the 20th century.

Imagine the world without it.

Imagine trying to pull off a similar feat today.

Or, dare we say it, imagine getting the entire nation to stop what it’s doing and pray for the men going into battle.

“Tolerance and Goodwill Among All”

On that fateful night, you may remember, President Roosevelt took to the airwaves and prayed.

It was a six-minute prayer peppered with lines we’d expect at a political pep rally, but there was one line he uttered that demands our attention today.

Protect these soldiers, the president asked…

That’s the idea that propelled those thousands of newly minted men on that beach.

They didn’t want to be there.

They didn’t want to die.

They wanted to be home, plowing their fields and eating fresh strawberries from their garden.

But they didn’t have a choice.

It’s not because their lieutenant dropped his sword and told them to run ahead.

No. They died because they didn’t want others to die.

They gave up their freedom because they couldn’t stand the thought of a world where Liberty could be locked up and starved.

They put a picture of their sweetheart in their pocket and sharpened their bayonets… just so others may have what they had back home.

And they fought so that justice could arise and tolerance and goodwill would be adored by all.

And that will always be America.

Are We Worthy of Their Fight?

We often think of these men as we pick up our pen.

Do we honor their fight? Is this what they died fighting for? Is what we see each day worthy of what they saw that day? 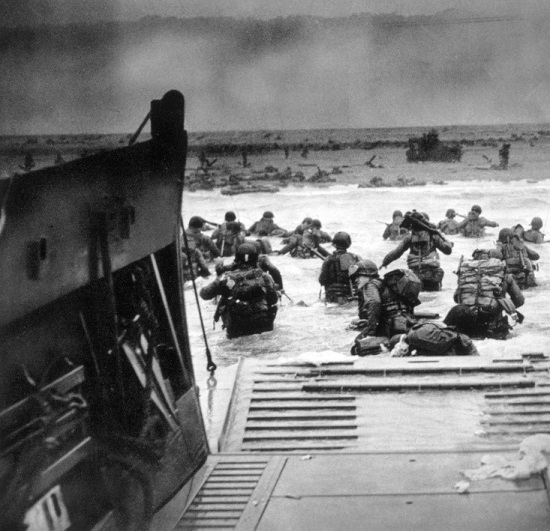 We know the answer.

Their sacrifice was immensely larger. And those young men, as naïve as many were, stepped off those landing craft, jumped from the skies and crawled onto the beach knowing exactly that.

Their mission was far bigger.

It was bigger than anything that had ever been done before or since.

The operation that day was huge.

The leaders were skilled and thoughtful.

But the fire in those men’s hearts for an idea as grand as Liberty was something mighty and magnificent.

Men like that are rare. The ability to get tens of thousands of those men to head in the same direction is even rarer.

It’s one of this world’s greatest accomplishments.

We’ll wrap up with the words of one of the men who made it happen, Dwight Eisenhower.

In his orders of the day on that, he told his men…

The eyes of the world are upon you. The hopes and prayers of liberty-loving people everywhere march with you.

Our Triad is in a fight for its life. And your money, your health and your freedom are on the line.