There were gunshots on the farm this week… gunshots at sunrise.

As we poured a steaming cup of our morning coffee, we looked out the window to see a red fox sneaking his way through a pile of brush we cut last week. He had his eye on our flock of sheep in an upper field.

We watched to see how far he’d take it. Was he curious… or was he going for the kill? We’re expecting newborn lambs any day now, and we figured he found one before we did.

As he crouched down and slid on his four short legs through the spring’s tall grass to the edge of the flock, we decided it was time to take action.

An offhand shot could do more harm than good at that distance, so, stepping outside, we aimed for a patch of loose dirt in front of him. As the ground exploded between him and his target, we reckon he thought twice about his choice of breakfast.

He bolted for the cover of some nearby trees.

We doubt he’ll be back.

Foxes are smart that way.

Now the question is whether we wily humans will learn from the gunshot that just grazed our nose.

We cheered the news last week that the nation’s brokerages have seen a huge surge in demand over the last two months.

Investors who missed their shot at the big bull market have wised up and are going after buying opportunities.

The numbers are quite large.

TD Ameritrade, for instance, saw 608,000 new accounts started in March. Financial apps like Robinhood saw time spent on their platforms spike by 50%. And E-Trade saw a surge of more than 363,000 new accounts last quarter… Almost all were retail traders.

That’s good. It shows that thousands of folks see the buying opportunity in front of us. They know, as we’ve been preaching, that it’s now… or never.

Perhaps that’s the good thing in this mess we’ve found ourselves in this year. Folks are indeed learning the error of their ways.

Americans who were spending every penny they earned and then some… are now seeing the immense value in stashing a bit away each week.

The nation’s personal savings rate has soared. With some 13% of income now being put aside, the country is saving at a rate we haven’t seen since 1981.

But here’s perhaps the best news in all of this.

Even as so many folks were creating new brokerage accounts, the folks who already had them wisely stayed out of them.

That’s right. Even during the worst of the painful dive in March, which brought stock prices down by an average of 30%, most investors were wise enough to know not to touch their long-term savings.

Look at this chart. It shows quite a victory. 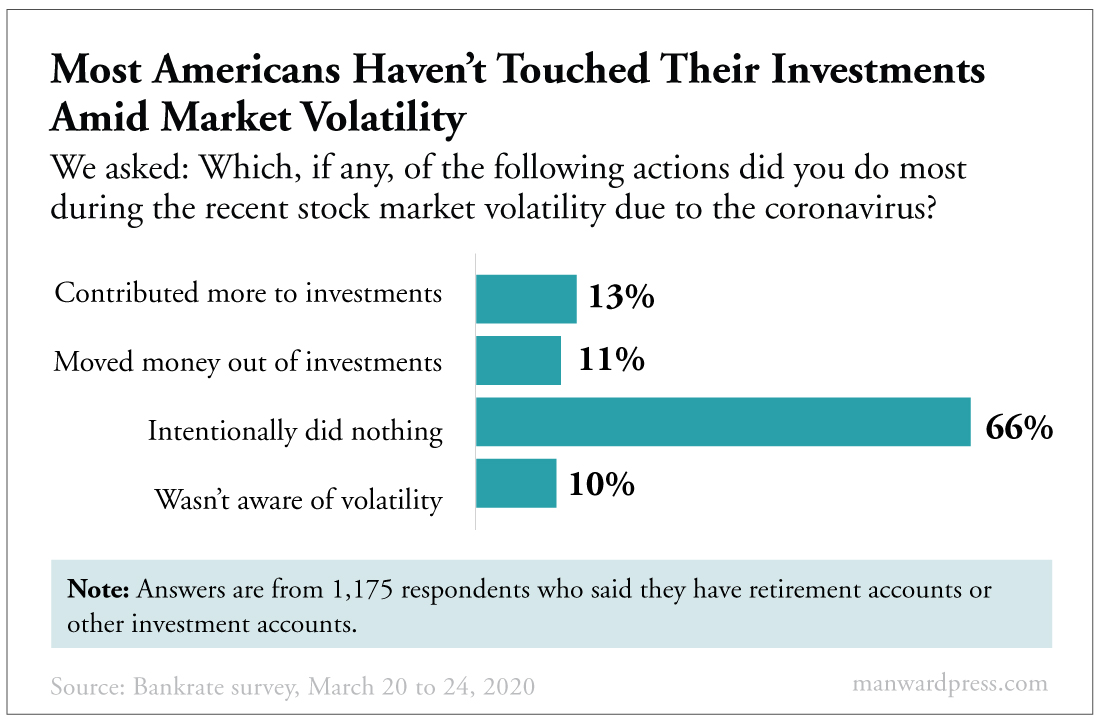 According to Bankrate, more than two-thirds of folks surveyed purposely did nothing with their money in the midst of the crash. Even better, more folks contributed to their accounts than withdrew.

As for the 10% who claim they didn’t know about the volatility… they’re either liars, ignorant or just plain lucky.

Either way… the news is good.

This is quite a victory for the Triad and our grand mission.

Folks are saving. They’re investing in stocks. And they’re learning the error of their ways.

If you’re one of the folks who’s started to save more but doesn’t know what to do next… we’re here to help.

We recently revealed our No. 1 investing secret… a trick to making as much as $7,505 each month on average. Click here for all the details.

Mark Ford shares one of his favorite income opportunities that anyone can get into... and become rich in the process.

Stocks are soaring, and Washington is doing anything it can to keep the party going...

Is COVID-19 speeding up the death of cash? Check out this sign spotted at a huge chain store...