Oh boy… we don’t know what screen to look at.

On the other, well, things are a bit odder.

What’s happening to both is confirmation of our economic thesis – free money and inflation are doing crazy things.

The timing is perfect. It’s lambing season on the farm. Starting next week, we’ve got a flock of ewes that are oh so eager to double and perhaps triple the size of our flock.

Those fat (and hungry) sheep have no idea their little lambs are surging in value.

If you’re a Manward Letter subscriber, you know our “big prediction” this year hinges on the notion of a big slug of “surprise” inflation.

Prices will rise, and the officials in charge of such things will act like they never saw it coming. Some of the dumber and more entrenched of the lot may not even have to act.

Thanks to the free-money bonanza happening all across the world, asset prices are soaring. Crypto is merely the face of the action.

Speculators are having quite some fun. (We sure are.)

But dig deeper and we see pain.

After all, a fella can stay away from crypto if he can’t take the risk. But he’s gotta eat.

All across the market, food prices are rising.

The cost of corn and soybeans has soared. A bushel that went for less than $9 a few months ago is now trading close to $14.

Put these moves on a chart next to the S&P 500 and we see the action is quite the same.

It’s the free-money bonanza at work.

For some farmers, it’s good news. The grain in their bins has nearly doubled in price.

For ranchers, though, it’s rough stuff. The corn- and soy-based feed they dump into their troughs each morning has surged in price.

The market is trying to adjust. The price of meat is on the rise.

That’s not good news for the average American.

Here’s a chart of sirloin prices over the last decade or so… We bet you can tell when Uncle Sam started handing out free money. 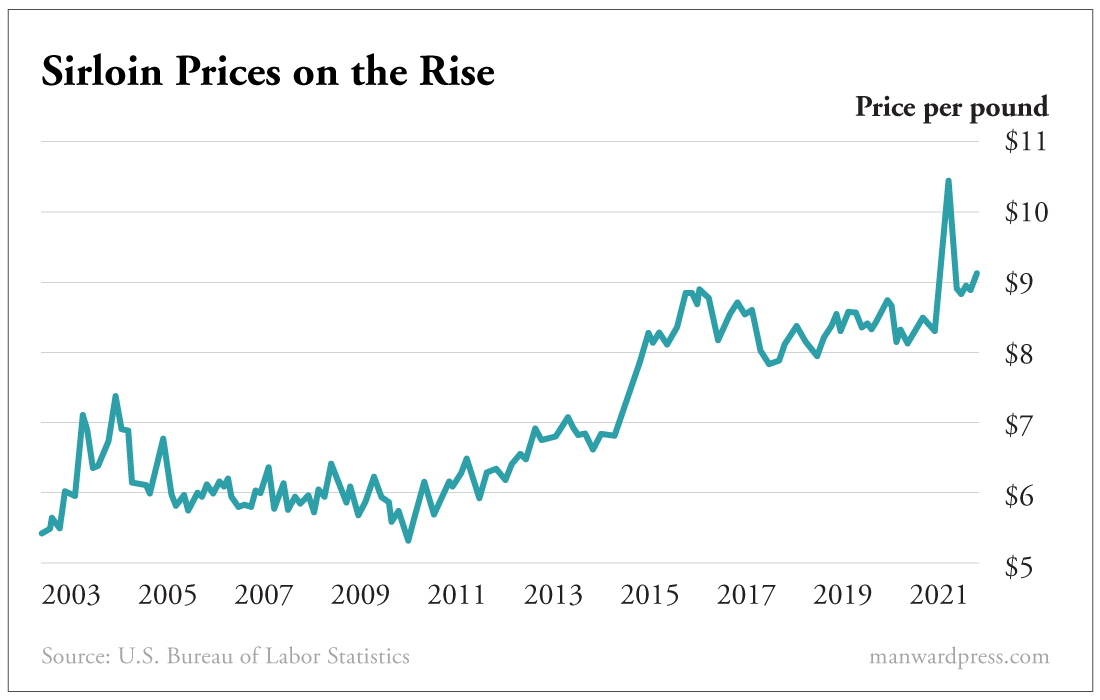 It goes straight to our point that unless we do something to counteract this trend, our standard of living will go down.

In other words, as steak prices rise, we either need to make more money… or eat less steak.

We’re not saying to buy a farm. Oh my, no. When we’re bottle-feeding lambs at midnight next week, we may even curse ours a time or two.

It starts with understanding the threat. It won’t be much of a topic on the nightly news.

In fact, we dug up some old articles from 2012 this morning. That’s the last time we saw a spike like we’re seeing now. We found headline after headline that said it wouldn’t lead to a sustained rise in prices.

The chart above would disagree.

With some understanding, we can think and invest differently.

We’re now more bullish on commodities than we’ve been in a decade. We’re convinced we’ve just seen the start of the next decadelong supercycle.

In the next monthly issue of Manward Letter, we will show readers exactly how to take advantage of it.

There’s more free money on the way. The boom will start with crypto. That’s where the fun is.

But as the effects of too much money and too few goods flow throughout the economy, it will get painful.

Adjust your strategy now to get ahead of it.

We’ll keep you updated on the lambs…

Do you have questions about how to invest in the new commodities supercycle? Send them to mailbag@manwardpress.com.