Doing what we do and saying what we say… we tend to get ourselves in a bit of trouble.

It’s especially true when we muse about money, the topic we’ve spent the most time studying.

We remember a finger that was pointed at us nearly a decade ago.

We wrote something for a major financial outlet that smacked the face of the wonks in academia. We said the best way to get rich in the stock market isn’t to study fundamentals or to pore over the latest earnings reports. No, the easiest way to make money is to know what Uncle Sam will do next.

The editor we sent the work to wasn’t happy.

“That’s the problem,” he said. “Everybody has the power to spout whatever crazy idea he wants.”

We figured his wife must be on Washington’s payroll.

We’d like to find that editor today (we imagine he’s been politely asked to retire) and show him a few facts.

First, we’d show him our Manward Trader portfolio. Two of the ticker symbols in it represent companies that get the majority of their sales from Uncle Sam. Both are crushing the returns of the broad market… with gains as high as 88%.

But we’d also remind him that we don’t have a pony in this race. We’re profit agnostics. We don’t care where the gains come from… that when we trade on Uncle Sam, we’re really just trading on the half-cocked news that agencies like his report.

As always, the numbers back us up.

You see, we did some digging recently.

We wanted to prove that the media wants the economy to turn sour. After all, a self-fulfilling recession would be good for ratings and good for its political bent.

It’s why the headlines are dour, and yet the economic numbers are good… if not great.

We dug through the stats from the 2008 recession. We wanted to see just what the media was reporting… and why.

The numbers are fascinating.

If It Bleeds Lies… It Leads

Of all the stories printed or aired… the government led most of them. With 32% of the coverage, the White House’s and Washington’s responses to the downturn was the most covered story.

What’s most interesting is what got 23% of the media’s attention.

It was the media.

According to the folks at the Pew Research Center, after the press was done talking about the White House’s reaction to the Great Recession… it talked about itself.

Nearly a quarter of all stories were “initiated by the press itself and did not rely on an external news trigger.”

In other words, the newspapers and TV outlets were filling air with speculation, hype and anything they thought could get eyeballs.

If they had to wait for a real news story… there’d be dead air, low ratings and classic I Love Lucy reruns.

Actual stories of businesses – the things we’re actually buying when we purchase a stock – were the third most reported issue, while stories of ordinary folks were a distant fourth.

What’s most startling is that once the recovery set in and once the political fighting slowed, news coverage plummeted.

The Great Recession accounted for 46% of all news coverage in March 2009 (the bottom of the market’s drop). But by June, as the Dow zoomed higher, it was down to 21%… despite the serious economic questions that remained unanswered.

Again, from the folks at Pew:

The clearest example came in cable news. Once the political battles subsided, coverage fell by about two-thirds from March to April.

In many ways, the 2008 meltdown was the equivalent of 9/11 for the financial press.

Prior to the terrorist attacks in New York, 24/7 news was a struggling concept. But as Americans glued themselves to the worrisome words scrolling across the bottom of their screens, the concept took off and never faded away.

It’s the same for the financial rags.

They’ve made an art of turning the mundane into a market-moving story.

Despite days with no real news to share, the mainstream press manages to fill the air all day, every day.

But as the data shows… there’s nothing that drives headlines better than some high-stakes government meddling. 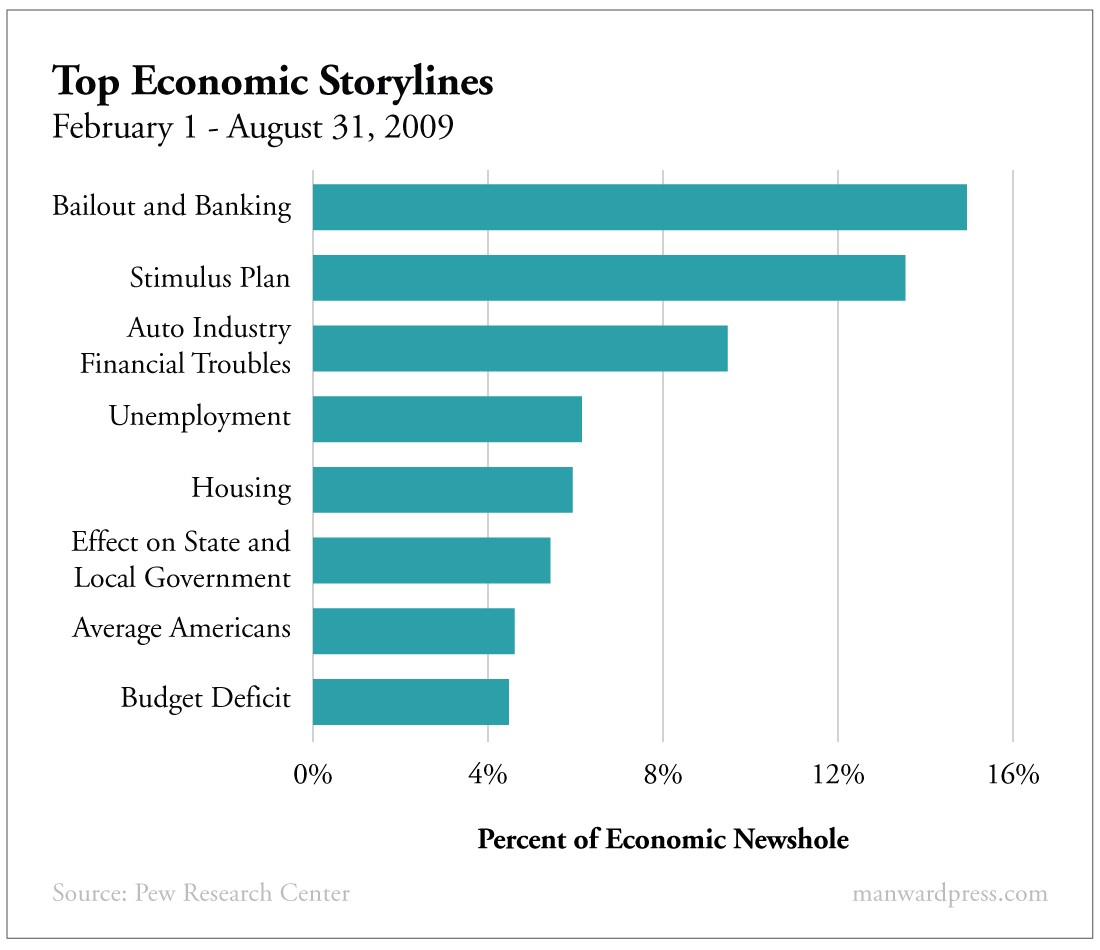 It’s why we open the newspaper this morning and see young journalism graduates still spilling ink over the evil outcome of a yield curve inversion that lasted just a few minutes… debating the “real” meaning of a single word in the minutes from the Fed’s latest meeting… and tracking the latest rumors of a potential tax cut proposed by the president.

The idea ties directly to a theme we’ve covered a lot. Clearly, Know-How plays a leading role in our financial Liberty.

Knowing what matters, what doesn’t and the truth behind it all is critical for financial success.

It’s true that we got in trouble for what we wrote.

But we’re okay with that. We don’t need to write for that outfit anymore.

We’ve got our own thing going… and we’ve got plenty to cover.

Note: I’m convinced the government is going to make one its biggest moves ever on September 18. That’s when it will make a decision that will affect our economy and our money in a very big way. Stocks could plunge. But there’s a way you can sidestep this action. It takes just five simple steps. Get the details here.

Deprive any nation of this one crucial element, and it collapses as surely as night follows day.

If you ever needed convincing that health and Liberty are connected... this is the essay that will push you beyond the brink and make you a believer.