A bluebird landed just outside our window.

He chirps on the limb of an old blue spruce tree. The bright snow on the ground beneath him tosses warm light in his direction.

We took a break to watch him.

Some days… it’s the simple things.

We wondered what the bird has seen, where he’s been… and what he thinks of us all cozy and warm in this brick- and stone-lined nest we’ve built for the family.

And then… we heard a chirp inside the house. It was our email.

Crypto had a good week, and subscribers are writing in.

The three coins in our most recent research are zooming ahead… leaving the stock market in their digital dust.

Indeed, the trend is going as promised.

A reader wants to know why crypto has any value if the government can just pass a law and ban it.

We look out the window to the bluebird. He’s too busy poking at something in his feathers to give us an answer.

It’s a question we too have pondered.

It once had merit, but now it doesn’t.

Take those three coins we mentioned above. They aren’t currency. They have no intent of ever replacing the dollar.

Nope, they’re tokens that pay the admission to a powerful platform. Without one, you can’t get on the other.

They’re part of something you’ll likely hear a lot about in the coming months and years – DeFi, or “decentralized finance.”

If you’ve watched crypto prices, you likely know Ethereum is a hot topic. Its coin is smashing records… and so are the coins that play well on its network.

It proves, once again, that the best way to play crypto is not by trying to pick a coin that will dethrone the dollar. That’s a fool’s game. Most DeFi coins do just the opposite… they depend on fiat money.

They do much the same thing as the big houses on Wall Street do (or at least that’s their intent). They just aim to do it quicker, cheaper and more equitably.

Much of it is still in its infancy. This makes crypto investing quite speculative. But that doesn’t make it the equivalent of a lottery ticket or something the government can simply outlaw… far from it.

It’s quite fascinating to watch – it’s like witnessing the birth of the world’s next financial beast.

What will he grow up to be?

What’s that? Is our bluebird back to singing his song, or is it another email?

The bird shrugs his shoulders and gives us a “wasn’t me” look.

We look at our screen… It’s not one but two notes about our recent piece on the booming potential of investing in share buybacks.

Just like we do with our kids’ questions, we’ll start with the easy one…

When Apple started their share buyback in 2014, the stock was around $18 per share. Now the stock is 700% higher and sporting a P/E of 41. Does that seem prudent to borrow money to buy back shares of a company that looks to be way overvalued? Not to mention a zany market where stocks losing $5 per share and looking to go out of business sky to $500? I think there might be more prudent uses of the shareholders’ money, currently. – Reader S.T.

We’ll call your bluff. What is a more prudent use of shareholders’ money?

Should Apple buy up another competitor? Surely it will, but in an anemic economy, it had better be careful. Acquisitions aren’t cheap. And the wrong one can be downright expensive.

Apple has enough cash to buy up most of the S&P 500… but to get to it, it first must repatriate much of it, pay enormous taxes and then dump it into a go-nowhere economy.

It’s far from a good use of cash. Uncle Sam would get far more than shareholders.

It could also pay a dividend. It’s a good way to unload some cash. But it’s not ideal for shareholders who have to pay taxes on it.

Once again, Uncle Sam would get more than his fair share.

Indeed, borrowing at dirt-cheap prices makes the most sense.

And with leveraged buybacks, share price isn’t much of an issue. As long as the return is greater than the interest rate, the plan will pay for itself. Like we said… it’s stock market alchemy.

Not every company can get away with it… but Apple sure can.

They are worlds apart.

And on to the harder question…

The simple – simple is rarely good – answer is that you must read a company’s quarterly and annual reports. They will outline any new buyback plans, discuss what remains in an older plan and, most importantly, detail exactly how many shares were purchased over the previous quarter or year.

But, beware, there are a lot of companies that don’t tell the whole truth. Gasp!

These companies will announce a buyback plan and either won’t make good on it or will issue so many dilutive options to insiders that the number of outstanding shares never goes down.

Those companies are traps. Stay away.

To overcome this, we pore through charts that show the number of shares outstanding. If the number is getting smaller, we know the company is making good on its promise.

Here’s the Apple chart we shared last week. It tells the tale… 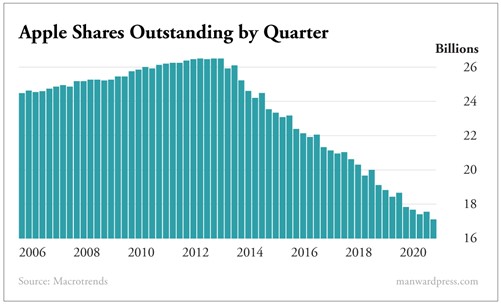 Before our little bluebird flies away, we’ll wrap up with one more note… this one from our self-proclaimed nemesis who appears to finally see things the way we do.

You are so right. Money cannot buy you happiness and does not (but does buy freedom). I believe happiness comes from within and is inexorably dependent on optimism. I see my glass always as half full and so I am happy with that. I even love seeing I have some left to enjoy when the scotch tumbler is a quarter full.

Optimism is the key to happiness – is indeed the very source and essence of happiness in most cases – but even I admit it is hard to be optimistic when you are hungry and cold, living on the street in the rain. So yes, money can help meet the bare necessities of life – food, shelter and clothing (some measure of freedom) – but after that, happiness comes from within, with the optimism you bring to the future before you. And more importantly, you have to choose to be optimistic – it is a choice and that is the key – you have to choose to be optimistic, to see the good in people and to believe the best is yet to come. Regards, Your friendly nemesis (but just friendly today). – Reader J.H.

They’re the best words J.H. has ever written us. We’re optimistic that there’s hope for him after all.

We hope you have a bluebird day.

And send your questions and comments to mailbag@manwardpress.com.