“Won’t somebody [bleeping] do something??”

That was the chant inside a crowded arena over the weekend.

The crowd of thousands – who spent their money and their time to hear somebody strum a guitar and sing for a couple of hours – was angry.

They were reacting to the weekend’s shootings.

They want it to stop. They want the headlines to go away.

And, since they’ve got music to listen to, they want somebody else to do it.

They demand new laws to fix the problems created by the old ones.

As you’d suspect, we offer a different take on things.

Folks who are begging somebody else to do something should be flat-out ashamed of themselves.

They need to get off Twitter, put the remote control in the trash, walk out of their feel-good concert and take accountability for the world they live in.

They need to look in the mirror and know, without a doubt, that they’re the only ones who can do something.

The facts – if we dare open our minds to them – are astounding.

It’s why we are convinced it’s our Connections that define us.

There is no doubt our culture is sick.

After decades of decline, the suicide rate in America began to soar in 1999.

It hasn’t stopped rising since.

The rate at which folks kill themselves is now more than double what it was a generation ago.

It’s downright frightening… and yet nobody bothers to talk about it.

Given the news of late, it’s no surprise that it’s white men living in the nation’s rural areas who are most at risk.

Men who have been sickened by an infectious culture are either hiding from the pain or are shooting up our schools, churches and shopping malls.

But it’s not surprising.

While all the Twitterites (or are they simply Twits?) wait for a magic piece of legislation, we’ll remind folks of the slippery slope we so often warn about.

And these days it’s riddled with bullet holes.

We’ll start at the top of this hill.

Don’t worry… we’ll hitch a rope to our waist so we can pull ourselves back out.

A recent study showed that more than 1 out of 5 millennials have no friends. Worse, roughly a third say they have no “best friend.”

It proves our vital Connections are under attack… and the headlines show it.

But, again, it’s no surprise.

Those poor kids are tumbling down a slippery slope.

The youngest generations don’t wake to an old-fashioned alarm clock… they rise to the sound of their phone.

They pick it up and swipe it until the noise stops.

With the device already in their hands and their dopamine levels running low, they check their texts and hop online to see what’s new in the fake world of Facebook.

Did they get any likes… any responses to their selfie… any shares of their witty joke?

That little box in their hand triggers an immediate – and highly documented – rush of excitement in their brain.

With their addiction fed, they hop downstairs, eat a bowl of highly processed, sugar-rich cereal and get those dopamine receptors fired up some more.

High on the same hormones that feed alcoholics and drug addicts, they head off to school.

This is where it really goes downhill.

Bottom of the Barrel

At school, teenagers are treated like fragile little vessels. They can’t be offended… can’t be disciplined… and certainly can’t be taught the truth of the world (they’d run home crying).

Every day is a pep rally where the cheerleaders at the chalkboard preach a feel-good curriculum that’s approved by your local legislator.

Everybody wins, our kids are taught. And if they lose… surely it’s capitalism’s fault.

Shop class has been replaced by diversity training. Gym class favors the fat. And Johnny still cusses in English class… because his life has been tough and the teacher’s not allowed to do anything lest she find herself in a chat with the school board.

Here it is straight from one astute student’s mouth:

High school wasn’t designed to encourage mature, motivated, passionate young adults to learn – it was designed to cater to the bottom of the barrel, to create a population that can follow directions, memorize facts and fill out paperwork.

We continue falling down the slope…

When the final school bell rings, most kids these days don’t have to worry about heading to an after-school job… not with sports and the grand visions of big scholarships and pro contracts in their heads.

It’s training for later in life.

Why work when the government promises so much?

As the day winds down, today’s kids are lucky if both parents come home at the end of the day.

The share of American children living with an unmarried parent has more than doubled since 1968. A third of kids now go home to just one parent… and it’s probably mom.

Instead of heading into the garage with dad, a lot of kids spend hours playing gory shoot-’em-up video games where everybody dies… and then things start all over again with the push of a button.

Or they drool in front of the TV and let Hollywood stir their vision of what’s real and what’s drama.

A friend sent us this scene from the morning news… 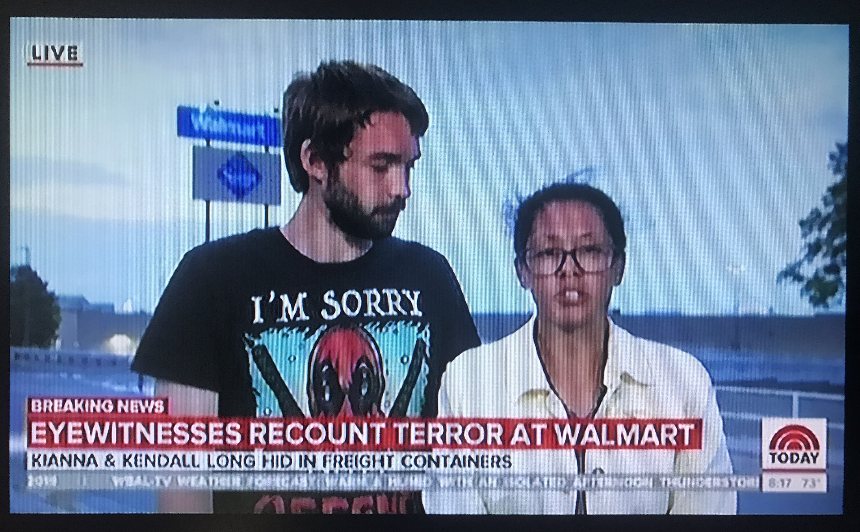 We found it ironic that one young man who witnessed the violence in Texas was on camera wearing a T-shirt advertising Deadpool… an extremely violent movie about an assassin for hire.

We didn’t see the clip, but we bet he said, “It was just like the movies.”

This slope sure is slick.

Later that night, our poor youngster will log on to a computer, check their Instagram account, upload a few pics to Facebook and stare at a screen for another hour or two… giving their brain one last slug of that dopamine it craves.

In all, he’ll put in a whole day without ever getting a healthy dose of reality.

If he’s like so many, he won’t get outside. He won’t know the pain of coming home without a trophy. And if he complains about it or gets out of line… somebody will put a pill in his mouth.

And yet… the folks onstage are pleading for somebody to do something.

It’s a great way to get concertgoers stomping their feet, but it’s a lousy way to raise a nation.

Given the slope we’re sliding down, it’s no wonder that adolescent depression has risen by nearly 50% in the last decade.

It’s not hard to find the problems.

They’re all around us… and they can’t be legislated away.

When these headline-craving dopes on TV say it’s our boys who are broken, we don’t disagree.

But the boys are only the symptom. They’re broken because something far stronger is breaking them.

Our culture has gone mad.

And it’s killing us.

To think the government – that has had 250 years to write the “good” laws – can outlaw this sort of insanity is flat-out ignorant.

It thrives on it.

Just look at the headlines, the tweets and the jabs.

The only way to fix it is to focus on what we know works.

It’s the backbone of our mission. It’s why we do what we do each morning.

It’s only when we master our Liberty, Connections and Know-How that we’ll fix this problem.

If folks want somebody to do something… they should [bleeping] start with themselves.