We woke up this morning in a dank hotel room in Dallas.

Even so… it’s going to be a million-dollar day.

We’re excited to be here. We’ve been invited to chat with a group of CEOs from some of the nation’s most promising small cap companies.

But before we get there… we must figure out where we are.

It turns out there’s a reason our hotel was the only one in the area with rooms available this week. It’s under renovation – a term that we now know means that they’ve sold all their furniture.

And that’s not to mention the armed security guard at the little deli across the street. From what we saw after the sun went down, he probably keeps busy.

We were glad to see him. We don’t have these problems where we come from.

But we’re not here for the sights or the ambience. If so, we’d get our money back.

No. We’re here taking advantage of our Connections.

You see, later this morning, we’ll leave our hotel to go sit with some of the most pragmatic business leaders in the country. We’ll hear what’s really happening in the nation’s economy. We’ll hear what these executives are most excited about. And what they fear the most.

We’ve got meetings scheduled with CEOs who represent nearly all sectors of business – from tiny biotech companies and oil drillers to homebuilders and REIT operators.

What’s important to note is that all of the folks we’ll meet with today come from companies with market values of a billion dollars or less – most are substantially less.

It’s within this size of business (some could be considered penny stocks) where the top brass still have firm control over their companies. They’re looped into the day-to-day operations. They know what’s happening and why.

In many instances, in fact, they’re the folks making it happen.

That’s why we’re here (despite the accommodations). When it comes to investing, it’s not always what you know… but who you know and what they know.

But what’s funny about our trip and the folks we’ll meet is the artificial cloud that hangs over the topic of investing in small caps and, especially, penny stocks.

We say it’s because investors fear what they don’t understand.

It’s in our genes.

The Stone Age man who saw a shadow behind a tree and worried it was an angry lion was likely wrong nine times out of 10.

And the man who innocently thought the shadow was just his friend returning from a hunt was likely right nine times out of 10.

But it’s that one time out of 10 that makes the difference.

The worrier survived and passed on his genes. And the man who didn’t worry?

But here’s the deal…

The mere act of worrying is worthless. It won’t protect you. And it certainly won’t make you rich.

We’re all familiar with the idea of fight or flight. When we believe we can beat the foe, we fight. When the odds are against us, we take off.

For too many investors, though, there’s no such thing as “fight.”

“How can I fight the market?” they ask. “It’s far more powerful than I am.”

Fair enough. Those are natural and normal thoughts.

Success in the stock market is not about sheer strength or power. It’s about knowledge, endurance and mobility.

It’s having the courage not to run.

Let’s face it. If “flight” is your answer, you’ll never build wealth.

We certainly wouldn’t be here this morning.

A Wealth of Truth

Don’t know what we mean? Look at your portfolio…

If you’re worried about retirement and yet you aren’t investing in high-growth opportunities like small caps or penny stocks because of fear… sure, you’ll survive today.

Because you’re letting an ancient instinct control your fate.

You may think this is contradictory to our analogy. After all, the Stone Age man afraid of the lion didn’t die. But lions and stocks are, to state the obvious, two different beasts.

Tiny stocks won’t kill you. And unless you take obscene risks, they won’t make you go broke.

It’s only your instinct and your natural fear of the unknown working to convince you that small stocks are dangerous.

And yet when we pit small cap stocks – using the Vanguard Small-Cap ETF (VB) as our point of comparison – against the oh-so-sage S&P 500… just look at the results: 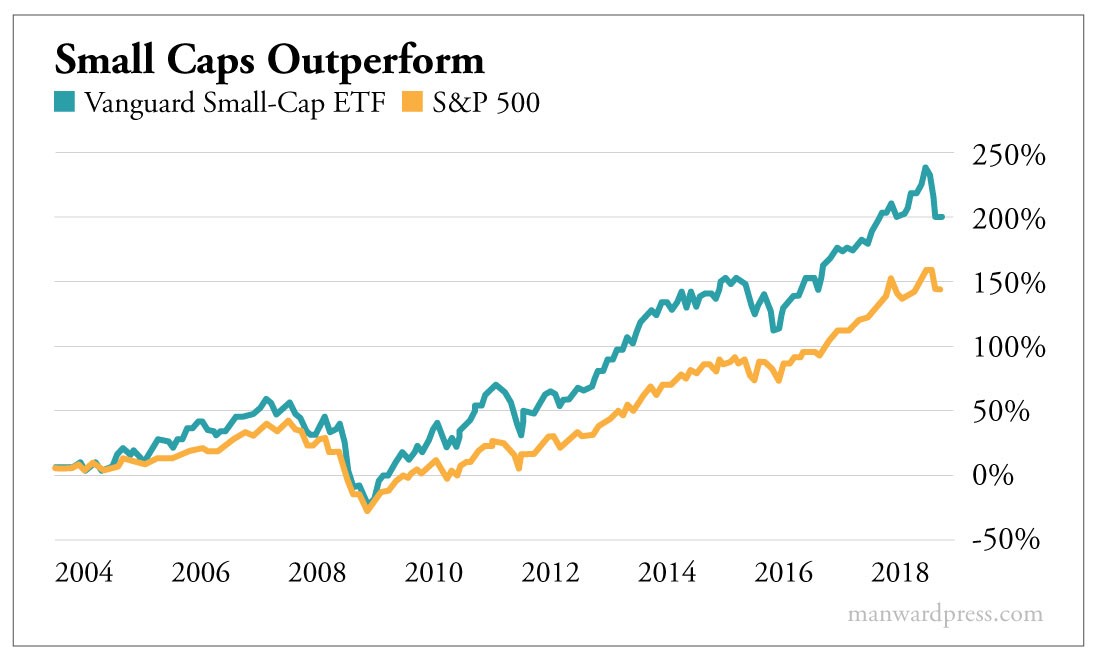 It’s quite the outperformance.

Over the past 15 years, the Vanguard Small-Cap ETF has outperformed the market’s so-called “top stocks” by more than 40%… and that’s without using a bit of market intelligence to sort the good from the bad.

Now you know why we’re here… and why we’re excited to get out of this hotel room.

There’s money to be made.

We’ll tap our small cap Connections and turn today into a million-dollar day.

Look for all the details of what we find tomorrow.