It’s been a wet spring on our microfarm. It’s the sort of weather that’s ideal for our freshly planted garden – lots of moisture and an occasional bout of sun.

The growing season is off to a good start.

But, oddly, that’s bad news for our neighbors… and possibly your health.

It’s hard to hit the local roads this time of the year without running into a tractor or two. We usually pass with a quick wave and a nod. These men are good people doing good work.

But we feel bad for them.

Their livelihood depends on many, many variables entirely out of their control.

It leads to what we call “force farming,” a practice we’re convinced is quite dangerous.

Take the traffic in front of our house this week. At least half a dozen times each day, a mechanical monstrosity known as a self-propelled sprayer rumbles down the hill.

If you’ve been to rural America, you’ve seen them.

They’re the giant, high-wheeled sprayers with long arms that can reach across many rows of crops. They could drive over a small car if they wanted to.

Despite being engineering marvels, these beasts aren’t something our neighbors want to be driving this time of the year.

They have no choice.

The wheat has to come out of the fields… the soybeans need to get in the ground.

But the winter’s crop is too wet to harvest.

That’s where we get the idea of “force farming.”

You see, Ma Nature is a beast… but modern chemicals are even stronger.

By spraying a choice chemical or two on their crop, farmers can overcome the spring’s rains and force their wheat to dry.

It’s quite a controversial practice.

But we don’t blame modern farmers. They’re just men working hard to make a living – a trait we honor.

Instead, we blame a culture that wants cheap… not healthy.

We blame a culture that’s fine with being ignorant about where food comes from… as long as it keeps coming.

With warm, dry weather on the way, Ma Nature will have it ripe for harvesting in a month or so.

Up until the 1980s, farmers would have cut the wheat and let it lie in windrows while it dried (as pictured below). 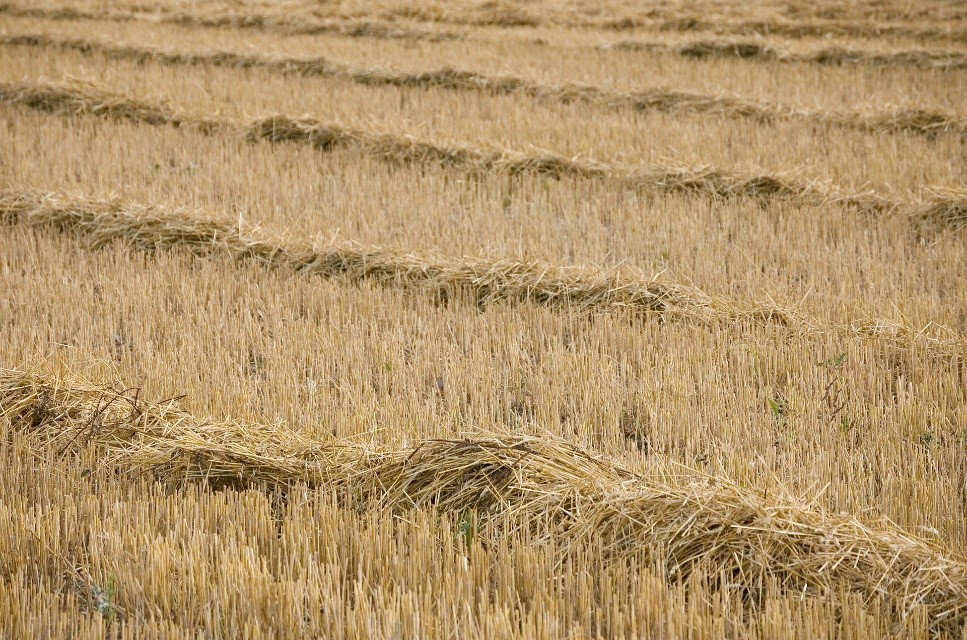 It could take weeks.

But modern farmers don’t have that sort of time – not with today’s expenses and low prices. They need to make a living.

They need to get another crop in the ground… right now.

That’s why they turn to modern chemistry and a concoction we love to hate… glyphosate.

You may know it as Roundup.

It’s the archenemy of the organic farming world – public enemy no. 1.

Officially, the jury is still out on the health effects of this plant killer.

Plenty of others shrug their shoulders, turn their heads and take another forkful of cheap food.

We won’t get into the debate – at least not here.

Instead, we’ll share the story that most folks don’t know exists. And we’ll answer a question we hope you’re asking.

Why in the world are farmers spraying weed killer on wheat that’s about to go into the food stream?

You see, Roundup makes wheat do a funny thing. The plant fights back.

Oh sure, the wheat eventually dies. But as it fights, the kernels surge in size, the grain dries out… and the plant ripens faster.

The process leads to more even ripening across the field, which makes harvesting easier and, importantly, more lucrative.

If nature won’t get the job done, “force farming” will.

They don’t have a choice these days. It’s either join the chemical club or lose the farm… to somebody bigger and badder.

It’s not a good situation.

There’s a very good chance what’s happening is quite harmful to our health.

We don’t know. (It’s a common theme in our modern society…)

But at least we know what’s happening.

And now that we do, we think we’ll grow our own.

Our garden is slow and works on its own time. But we’re happy – and healthier – that way.

P.S. Most folks care – at least to some degree – about what goes in their bodies. We try to eat healthy, chemical-free foods whenever we can. Yet we pay little attention to the harmful radiation emitted from everyday devices all around us. Make no mistake – the prevalence of smartphones, tablets and other gadgets has dangerous (possibly even deadly) consequences. And we have the research to prove it. Click here to learn more.